Increase in temperatures, increase in forest fires, disruption of precipitation… the effects of climate change on Turkish and French forests are strong. Supported by AFD, expert institutions from both countries are working together to adapt forest management to climate change. We protect our
Video
Viewed 28 times

Protecting our forests is crucial for combating climate change, conserving biodiversity, and for human health and development. Since 2012, Turkish and French experts have contributed to the protection of our forests and the future of our planet with exemplary cooperation in sustainable forest
Video
Viewed 169 times 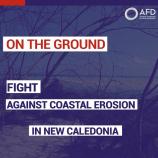 Ouvea is listed as World Heritage by UNESCO and is one of the largest Pacific atolls (54 km long, 132 km²). It has a population of 3,400. The island is particularly vulnerable to climate hazards and global warming: cyclones Cook and Donna in 2017, drought and water shortages, and rising water
Institutional document
Downloaded 243 times

As crises become longer and more complex, AFD Group has made a key commitment to sustainable peace, to the climate and to social cohesion. This commitment is part of France’s “Prevention, Resilience and Sustainable Peace” strategy aimed at minimizing States’ and societies’ vulnerabilities. This
Video
Viewed 304 times

Ouvea is listed as World Heritage by UNESCO and is one of the largest Pacific atolls (54 km long, 132 km²). It has a population of 3,400. The island is particularly vulnerable to climate hazards and global warming: cyclones Cook and Donna in 2017, drought and water shortages, and rising water
Institutional document
Downloaded 86 times

At the Interministerial Committee for International Cooperation and Development (CICID) on February 8, 2018, the government made a commitment to strengthen the integration of overseas territories into their regional watersheds by supporting cooperation projects with neighboring states. Measure No
Institutional document
Downloaded 191 times

The wars in Syria and Iraq have driven more than 15 million people to flee their homes and have caused the largest population displacement in the Middle East since World War II. The top host countries for these refugees are the neighboring countries, especially Lebanon, Turkey, and Jordan, which
Institutional document
Downloaded 141 times

Present in the Atlantic, Pacific and Indian Oceans, France has five departments and regions and seven overseas collectivities which are home to 2.7 million French citizens. Scattered across the globe, the overseas territories concentrate 97% of France’s exclusive economic zone (EEZ) – the second
Video
Viewed 331 times

A dairy product company near Istanbul has deicded to hire more women and organize awareness-raising workshops for staff to raise awareness around gender stereotypes. This pilot project, supported by AFD, is a real success: there has been a sharp increase in the number of women employees and a
Evaluation document
Downloaded 19 times

In Turkey, the budget support to the forestry sector was subject to an evaluation in July 2018. The budget support was granted in the context of the opening of chapter 27 of the pre-accession negotiations between the European Union and Turkey. The design of Turkey’s National Climate Action Plan