Dona Mena is a cashew producer in the Gilé reserve in Mozambique. AFD is funding a project there which aims to contribute to strengthening the cashew nut sector in order to allow a sustainable improvement of farmers' incomes while preserving natural resources. ©AFD2020
Research document
Downloaded 38 times 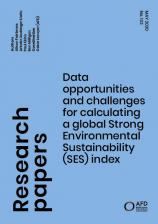 The Environmental Sustainability Gap (ESGAP) framework sets the basis to measure countries’ environmental sustainability performance, based on standards meant to represent the situation at which natural capital can maintain its functions over time. It is composed of 22 indicators, all supported by
Institutional document
Downloaded 261 times 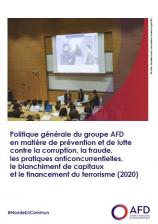 The purpose of this document is to outline the policy of Agence Française de Développement and its subsidiaries to prevent, detect and combat any act of corruption, fraud, money laundering, terrorist financing and anti-competitive practices which would undermine its activities or operations. The
Video
Viewed 68 times

Phnom Penh Water Supply authority (PPWSA), in Cambodia, is one of the most efficient in the world, with only 8% water loss, which allows it to keep prices very low. These results are only possible thanks to the work of the night shift teams, who spot invisible leaks thanks to a surprising technique
Institutional document
Downloaded 17 times 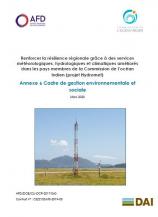 Global waste is growing exponentially. This is partially due to population growth, but also to changing consumption patterns… In developing countries, local authorities are struggling to cope because they lack means. As a result there are more and more unauthorized dumps, causing pollution and
Video
Viewed 60 times

In Bamako and in the main cities of the country, the water service is managed by two public operators, Somapep (management) and Somagep (infrastructure). The insufficient production is accompanied by population growth of more than 5% per year in the agglomeration, which has almost 2.3 million
Institutional document
Downloaded 15 times

Thailand, Southeast Asia’s second-largest economy, is an emerging country. But it faces a three-fold challenge: the ageing of its population, the maintenance of competitiveness and environmental preservation. AFD provides its supports in the country’s transition to green and sustainable growth
Institutional document
Downloaded 356 times 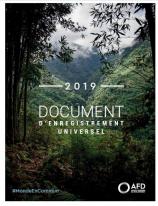 AFD maintained its growth trajectory in 2019 and reached critical size. For the first time, the Group’s commitment approvals exceeded the €14 billion threshold at exactly €14.1 billion, versus €11.4 billion in 2018, an increase of nearly 20%. Over 2,500 employees contributed to this sharp increase
Research document
Downloaded 22 times

This paper explores trends in wage and income levels and inequality and mobility in Egypt, especially since 2012. Data are from the 1998, 2006, 2012, and 2018 waves of the Egypt Labor Market Panel Survey (ELMPS). The findings point to declining real wages and incomes and a rise in inequality