Since 2008, the countries of the Middle East and North Africa (MENA) have been affected by different kinds of shocks. The international financial crisis and then the euro-zone sovereign debt crisis have brought on a sharp slowdown in the growth of goods and services exports from the MENA countries
Research document
Downloaded 35 times

This study provides a cross-analysis of the social and macroeconomic challenges facing Sri Lanka and is based on five sections. The first section addresses the socio-political context. In the second section, the growth model of Sri Lanka’s economy is analysed. The third section subsequently focuses
Research document
Downloaded 1597 times

Ghana stands apart from other African economies thanks to its consolidated democratic achievements as well as the pace of its economic growth since the early 2000s. The start of oil production in the second decade of the 21st century has significantly transformed the nation’s economic landscape
Research document
Downloaded 1075 times

Over the 1990s and 2000s, India experienced a remarkable acceleration in its rate of economic growth comparable in the mid-2000s to that of its neighbour China. This economic “take-off”, which was partly driven by private investment, was anchored in the country’s strong positioning on different
Research document
Downloaded 2542 times

It is now a widely recognised fact in the economic literature that the level of per capita income and the degree of sectoral concentration of economic activity evolve together over the long term. The empirical research of Imbs and Wacziarg (2003) has notably shown that production diversification
Research document
Downloaded 179 times 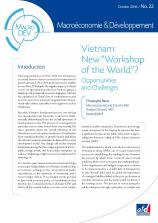 Following turbulence in 2012-2013, the Vietnamese economy seems to have recovered its momentum. Its growth rate was 6.7% in 2015 and is expected to stabilize at over 6% in 2016 despite the negative impacts of climate events on agricultural production. Further, against a backdrop of international
Research document
Downloaded 163 times

The Indonesian economy is experiencing structural changes and must deal with new challenges in an uncer¬tain international setting. In the past decade, its industry has undergone reprimarization (focus on mining and energy resources, palm oil, etc.), which was boosted by the sustained level of
Research document
Downloaded 2199 times

With 180 million inhabitants, Nigeria is the most populous country in Africa. Its economy is also the strongest. Just twice as large as France in size, its people are also very diverse: more than 250 distinct ethnic groups call it home. The northern part of the country is primarily Muslim, while
Research document
Downloaded 2267 times

Ghana, West Africa’s second largest economy, has been particularly adept over the last decade at consolidating its democracy and bolstering its growth regime. Despite the financial crisis, the country has seen average annual growth rates of over 7 per cent since 2005. Furthermore, Ghana has