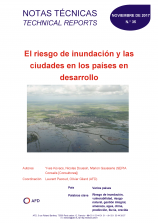 The risk of flooding is a natural hazard affecting the most people worldwide. However, it is more of a risk in terms of material damage than a lethal risk for the affected population. Integrated flood risk management (IFRM) constitutes a global response to flood risk that is structurally systemic
Research document
Downloaded 1020 times

The past decades have seen a growing appreciation of the role of market-based approaches in driving global development. Many coalitions of public and private players have emerged to promote them. How best to trigger and support these market-based approaches? How to leverage the expertise and
Research document
Downloaded 147 times

This note is based on a research program carried out by AFD since 2014 to assess the role of food markets in African cities and to shift to a more holistic approach of “food systems”, considering many Sustainable Development Goals (SDGs). Based on case studies led in Rabat-Salé in Morocco, Niamey
Research document
Downloaded 55 times

This guide is intended to help staff of Agence Française de Développement (AFD) and other interested stakeholders identify and address potential domestic governance barriers to implementing and enhancing climate policies and actions. The guide starts with the assumption that effective climate
Research document
Downloaded 11 times

Participatory irrigation management: from theory to reality – Insights from the Phước-Hòa irrigation project 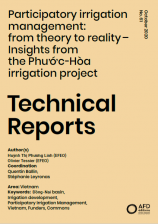 Female labor force participation remains low in Turkey compared to other OECD countries and labor market attachment is particularly low among women with children. In recent years, government policy has focused on the expansion of child care services as a means to support women’s participation in
Research document
Downloaded 47 times

In comparing the contrasting situations of the “Penja pepper” and “Oku white honey” supply chains after their registration as geographical indications (GI) in Cameroon, this technical paper identifies the conditions under which a GI can be a development tool for producers. The prerequisites: a
Research document
Downloaded 239 times

For twenty years now, the Sahel region has been marked by rising insecurity, political crises, and poorly controlled flows of people, arms and illegal goods, with a major risk of States becoming destabilized. In the wake of the war in Libya and the Malian crisis, causes, arms, and combatants have
Research document
Downloaded 712 times

Each year thousands of people and millions of dollars in assets are affected by flooding in Senegal; over the next decade, the frequency of such extreme events is expected to increase.  However, no publicly available digital flood maps, except for a few aerial photos or post - disaster assessments
Research document
Downloaded 1327 times