Present in the East Africa region for more than 20 years, AFD has been working with the cities bordering Lake Victoria to improve access to clean water and sanitations for the population. A long term partnership that raised concerns about the preservation of this Ecosystem, sustaining more than 40 million people. Overview of the solutions to preserve the second largest freshwater Lake in the world. AFD2021
Institutional document
Downloaded 127 times 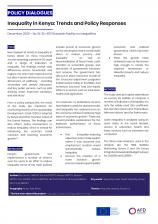 poverty, a finding that is similar to effects reported in CEQ studies done in other African countries, such as Ghana, Tanzania, Uganda and Ethiopia. The study also finds that people in the first six deciles of the income distribution are net beneficiaries of taxation plus all social expenditures
Video
Viewed 253 times

Marsabit forest, a natural space surrounded by desert, covers an area of over 16,000 hectares. This region in the North of Kenya hosts a core resource for neighboring communities and significant biodiversity. Rare species like elephants or Grévy zebras can be found there. Kenyans have growing
Video
Viewed 455 times

In Kisumu, the third most populated city in Kenya, pupils and teachers in the Angira school could not wait a second more: walls were crumbling, classrooms were on the verge of collapsing. The school was built in 1947 and had an urgent need for refurbishment. The most populated classrooms sometimes
Evaluation document
Downloaded 29 times

these roads to a maintainable standard and to place them under effective maintenance. The project overall met its objectives and scored well in terms of relevance, effectiveness, efficiency and impact. The interventions had high impacts on the beneficiaries, such as lowered transportation costs