With 1.9 billion inhabitants – almost a quarter of the global population – South Asia is the world’s most populous region. Over the past few decades, South Asian countries have experienced rapid growth, enabling 320 million people to rise out of extreme poverty between 1990 and 2015. As defined
Research document
Downloaded 150 times 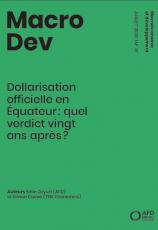 Ecuador adopted the U.S. dollar as its legal tender in January 2000, in a context of deep economic and political crisis. Almost two decades later in December 2019, the Executive Board of the International Monetary Fund (IMF) approved a total disbursement of US$498 million after the completion of
Institutional document
Downloaded 77 times

Latin American countries (Costa Rica, Mexico, Colombia, Ecuador, Peru, Argentina) in planning long-term decarbonization strategies, which contribute to the preparation of climate policies in line with the Paris Agreement. The first phase of this project is nearing completion and a report on the initial
Institutional document
Downloaded 159 times

Pakistanis’ growing demand for partnerships with French actors, AFD will mobilise tools such as FEXTE and promote the emergence of a French offer, although some French consultancies and firms are reluctant to operate in Pakistan.
Evaluation document
Downloaded 168 times

This document presents a summary of the evaluation of AFD‘s agriculture projects in Afghanistan from 2005 to 2014. The evaluation mission took place between December 2013 and July 2014, and covered all projects funded by the Agency in the sector. This summary first explains the rationale and
Research document
Downloaded 327 times

Using the ECM2 survey data on Ecuadorian migrants returning from Spain, we investigate the determinants of reintegration upon return. We study how the migration experience, but also the before- and after-migration characteristics, correlate with migrants’ outcomes upon return. We adopt a broad