In 2019, AFD and KfW carried out a joint interim evaluation so that the German government, AFD and the Jordanian government would be able to substantiate future cooperation concerning Sector Policy Loans in the water sector based on these evaluation results. The first water sector policy loan
Evaluation document
Downloaded 17 times

enabling the preparation and implementation of the City of Johannesburg’s spatial development strategy. The intervention was implemented after a similar intervention was conducted with the City of Cape Town. The evaluation noted that the combination of funding and technical cooperation for strategic
Evaluation document
Downloaded 33 times

the production of new forms of renewable energy and hoped to produce a demonstration effect – inciting similar initiatives elsewhere. The project was highly relevant and in keeping with the national objectives. The performance of the wind farm fell well short of what had been predicted, but the
Evaluation document
Downloaded 12 times

Ghana by increasing access of SMEs to finance. SME loans were so far underserved by the financial institutions of the country. This required a development of know-how through training and technical assistance. The project was deemed appropriate to market conditions as well as to the needs of the
Evaluation document
Downloaded 10 times

In South Africa, for the “Wind power” sector, Eskom’s Sere Wind Farm project was subject to an evaluation in December 2017. Climate change has launched a quest for sustainable development, which Eskom saw as an opportunity to implement efficient usage of clean energy in South Africa. It has
Evaluation document
Downloaded 7 times

In South Africa, for the “Low-cost housing” sector, the credit lines to Rand merchant bank (RMB), Nedbank and Amalgamated banks of South Africa (ABSA) were subject to an evaluation in July 2017. The lack of access to affordable mortgage finance was identified in 2003 as a key constraint facing
Evaluation document
Downloaded 1 time

these roads to a maintainable standard and to place them under effective maintenance. The project overall met its objectives and scored well in terms of relevance, effectiveness, efficiency and impact. The interventions had high impacts on the beneficiaries, such as lowered transportation costs
Evaluation document
Downloaded 3 times 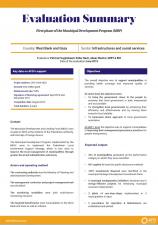 the local management of municipalities through greater fiscal and administrative autonomy. The MDP was rated satisfactory for all criteria except sustainability. During the first phase of the MDP all expected outcomes were achieved. This phase had a significant impact on the operational, financial
Evaluation document
Downloaded 1 time

small towns ranging from 5,000 to 50,000 inhabitants. The project addressed different management models that could be introduced in order to make small town Urban water and sanitation authorities (UWSAs) more sustainable. However, the government of Tanzania opted for the introduction of a single