Across the world, flooding remains the most frequent and most damaging natural risk. This technical report begins by exploring the reasons for this state of affairs: hydrological regimes, the existence of extreme events as part of a continuous distribution of possibilities, and the concepts of
Video
Viewed 98 times

This project, financed by AFD and the European Union, has contributed to improving access to water and electricity for Cambodian households by supporting small water and electricity enterprises and enabling them to improve their access conditions to an adapted financing offer. Proparco, AFD subsidiary for private sector, will finance a second phase of this project. AFD2021
Video
Viewed 153 times

This evaluation was completed between August 2017 and July 2019 by the Hydroconseil-Agriate Consortium. The AFD’s Evaluation and Learning Department (EVA: Evaluation et Apprentissage) was responsible for the overall management of the evaluation. A Reference Group comprising AFD experts and
Institutional document
Downloaded 79 times

In Phnom Penh, the drinking water system is of good quality. But in the provinces, the sanitation services are still largely undeveloped. AFD has been engaged in this sector in Cambodia since 2004. Therefore, it is positioned as a privileged partner of the public authorities, private operators and the government. The goal is to reach total water network coverage in urban areas by 2025.
Research document
Downloaded 45 times 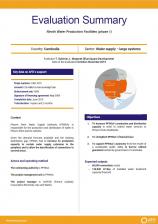 of the program is ensured. The close interaction between the AFD and the implementing agency is much appreciated and was a key factor of success for the program.
Evaluation document
Downloaded 15 times

support to the Regional Social Sciences Summer University, referred to as “Tam Đảo Days”, in the framework of the 2010-2013 partnership agreement. This partnership has the objectives of developing a multi-disciplinary training of excellence, creating a platform for debate, and attracting a wide