enabling the preparation and implementation of the City of Johannesburg’s spatial development strategy. The intervention was implemented after a similar intervention was conducted with the City of Cape Town. The evaluation noted that the combination of funding and technical cooperation for strategic
Evaluation document
Downloaded 27 times 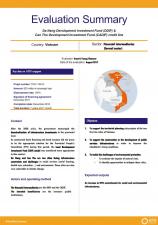 In Cambodia, for the “Agricultural water resources” sector, Northwest irrigation sector project was subject to an evaluation in September 2014. The Northwest region of Cambodia includes a wide rural area where the population mainly depends on agriculture. Agricultural diversity is very low and
Evaluation document
Downloaded 1069 times

In close partnership in 2008, 2009 and 2010, JICA and AFD approved a series of “climate” budget loans to the Indonesian Government in order to facilitate the design and implementation of an ambitious national policy to combat climate change (CC), supported by a high-level policy dialogue. This ex
Evaluation document
Downloaded 0 times

are conducting a longitudinal impact evaluation of the SKY health microinsurance project. The study aims at measuring the impacts of health insurance on the rural poor in Cambodia and shedding light on why households decide to purchase, or abstain from purchasing, voluntary health insurance. The