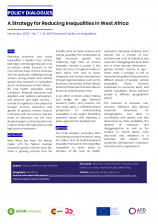 Reducing economic and social inequalities in Burkina Faso, Ghana, Mali, Niger, and Senegal requires a set of policies clearly focused on the most remote areas of these countries and the particular challenges facing women, young people, and minority groups. New research on inequalities across six
Video
Viewed 94 times

As France’s youngest department, with more than half its population under the age of 18, Mayotte naturally focuses on many education-related issues. It is an ideal playing field for the entertaining and educational activities of PLAY International, an NGO that uses sports to combat exclusion based on disabilities and gender inequality, among other factors. A report with Paralympic champion Arnaud Assoumani. ©AFD2019
Research document
Downloaded 24 times

effects on the social inclusion of children. The paper examines the gendered intersection of these spheres and policies to promote social inclusion and consequently both social cohesion and sustained poverty reduction. A key message of this study is that despite much higher levels of human development
Video
Viewed 201 times

In Kenya, where 93% of the population did not have access to health coverage until recently, patients can now subscribe to health insurance and pay for their care at a large network of hospitals using a very simple device: their mobile phone. It’s all made possible by Kenyan start-up CarePay, and
Research document
Downloaded 239 times

For twenty years now, the Sahel region has been marked by rising insecurity, political crises, and poorly controlled flows of people, arms and illegal goods, with a major risk of States becoming destabilized. In the wake of the war in Libya and the Malian crisis, causes, arms, and combatants have
Research document
Downloaded 3473 times

In the coming decades, West African countries could benefit from a “demographic window of opportunity” in order to reduce their poverty. The entry of 160 million young people into the labor market between 2010 and 2030 can accelerate economic growth. However, these countries will only benefit from