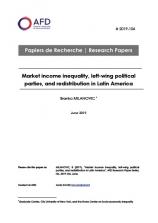 -income countries, and greater market-income inequality within a given country, are associated with greater pro-poor redistribution, although such redistribution is rather weak in Latin America compared to the economically advanced countries. We also find that more pro-left political orientation of
Research document
Downloaded 32 times

While Latin America has historically been considered a region of very high inequality, the performance of most Latin American countries in terms of reduction of income inequality has been remarkable good in the first decade of this century. Given that those improvements took place in a context of
Research document
Downloaded 6 times

Containing crime without affecting the livability of the urban environment is a major challenge in our society. Traditionally, researchers relate crime to socio-economic disorganization and people’s routine activity, as it influences effective control and suitable targets. An important open
Research document
Downloaded 13 times

As in many large cities, the now prevailing technical model for producing and distributing water in La Paz and El Alto is that of a centralized network serving the whole population of the two cities. La Paz and El Alto are no exception to the reality of the major cities of the Global South, where
Research document
Downloaded 3924 times

More largely, in the context of the fight against climate change, the subject of renewable energies takes on considerable importance. A large number of island States in the Pacific zone are extremely dependent on fossil fuels, and in the coming years, will face major impacts related to climate
Research document
Downloaded 2539 times

It is now a widely recognised fact in the economic literature that the level of per capita income and the degree of sectoral concentration of economic activity evolve together over the long term. The empirical research of Imbs and Wacziarg (2003) has notably shown that production diversification
Research document
Downloaded 5769 times

Climate change has become the most important global issue of our time and now occupies a key place on the global governance agenda. Recent attempts to create a concrete framework for mitigation have fallen short. This failure has been explored in a number of studies. These have mostly focused on
Research document
Downloaded 1295 times