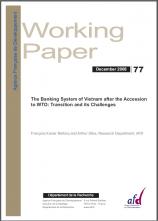 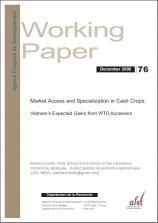 This paper discusses the link between trade liberalization and farmers’ decisions to specialize in cash crops. Farmers are differentiated between subsistence-oriented farmers and export-oriented cash crop producers. Amongst the latter, using a panel survey from 2002 to 2004, we can identify export
Research document
Downloaded 2177 times 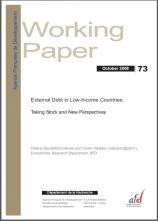 In the wake of debt relief initiatives (Heavily Indebted Poor Countries and Multilateral Debt Relief Initiatives), there has been a lot of questioning on donors’ lending strategies towards developing countries. Since then, attempts have been made to understand what went wrong in the past and to
Research document
Downloaded 2422 times

This paper describes the economic living conditions of the population in dispersed rural areas of Morocco and analyses their response to the introduction of a new micro-credit program. The first section of this paper closely follows the papers of Banerjee and Duflo (2007). It focuses on the
Evaluation document
Downloaded 1859 times 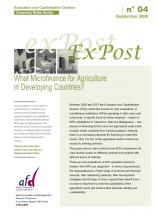 Between 2005 and 2007 the Evaluation and Capitalisation Division (EVA) conducted several ex post evaluations of microfinance institutions (MFIs) operating in both urban and rural areas. A specific focus for these missions – based on MFIs established in Cameroon, Mali and Madagascar – was placed on
Research document
Downloaded 2180 times

undesirable uncertainty. In this way, the authors demonstrate that improving trust between private investors and public authorities is certainly a question of reforming institutions.
Research document
Downloaded 2943 times

This paper is the executive summary of a collective publication: Africa and its Demographic Challenges: an Uncertain Future, edited by Benoît Ferry. This study was born out of a workshop on demography and population issues organized in early March 2006 by AFD in partnership with the United
Research document
Downloaded 2015 times 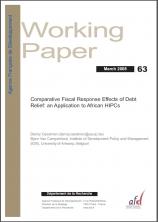 assess, for a sample of 24 African countries that have at least reached decision point status in the HIPC Initiative, to what extent this debt relief has created fiscal space in recipient country budgets, and what, on average, the actual fiscal response effects have been, relative to other types of aid.