Indonesia: Fishermen Back On Their Feet after the Tsunami

© Matahati Productions / AFD
Biodiversity
Asia and Pacific Indonesia
Palu, Indonesia
Indonesia:
Fishermen Back On Their Feet
after the Tsunami
650
boats will be distributed
2,600
beneficiaries
The strength of the tsunami divided by
5
thanks to the presence of a mangrove forest
The tsunami that hit hard in part of Indonesia in September 2018 destroyed their boats. Today, many fishermen in Palu, on the island of Sulawesi, only survive through humanitarian aid. But thanks to the project to revive the local economy and protect against natural disasters, funded by Agence française de développement (AFD), some are already returning to sea. Here is a report from Palu, in the centre of the island.

Located on the edge of the Ring of Fire, Indonesia is one of the most disaster-prone countries in the world: floods, earthquakes, landslides, tsunamis, volcanoes, cyclones, etc. In 2018 alone, the Indonesian National Disaster Management Agency (BNPB) recorded nearly 2,000 natural disasters.

On 28 September 2018, the coasts of Palu were hit by a tsunami triggered by a 7.5 magnitude earthquake off the coast. The human toll was high, with thousands of people missing and hundreds of thousands displaced. The fishing community was particularly badly affected by the disaster: every second boat in the bay was destroyed. Given their low incomes, most fishermen are unable to replace their lost equipment and restart their activities.

AFD, in cooperation with the CCFD-Terre Solidaire NGO and Kiara (a group of 9 fishing organisations in Indonesia), has launched a new project to enable coastal populations affected by the disaster to resume their activities as soon as possible. In particular, it provides for the distribution of 650 boats over three years and better preparation of the local residents for such disasters. 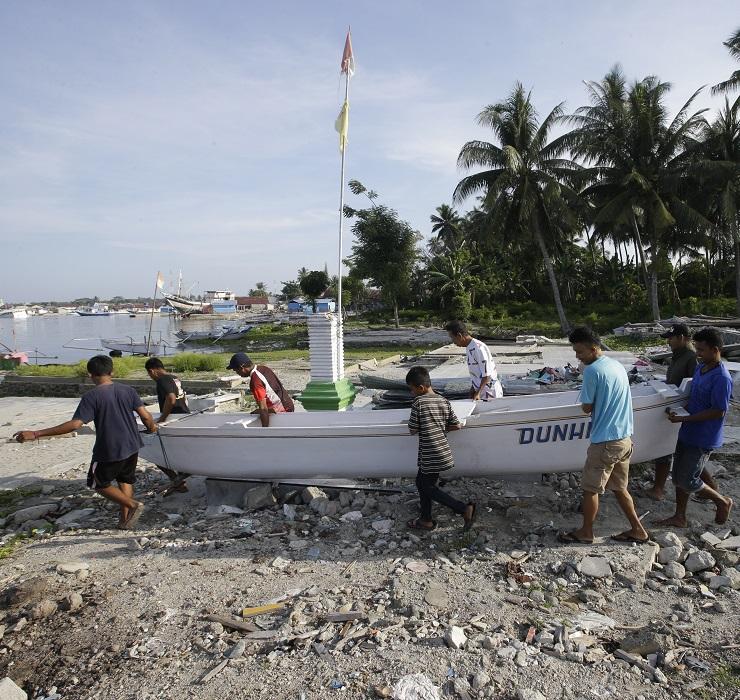 © Matahati Productions / AFD
Returning To Sea
Sugiarto’s family, originally from the village of Pantoloan Boya to the north of Palu, have been fishermen for three generations. When the tsunami struck, Surgiarto was returning from his third sea trip of the day when he heard a noise "like a big explosion." He saw a six-metre-high wave coming straight at him. He just had time to turn around and head for the coast. "Our house was washed away by the waves. I thought I had lost my family... And I was so happy to find them safe and sound again!” says the father of six children.

When Sugiarto found his boat, the hull was ripped open and the engine no longer worked. In the following weeks, he tried to repair his precious boat, but to no avail. It was impossible for him to return fishing. "Without a boat, how can I feed my family? One way or another, I had to go back to sea," he explains.

Sugiarto was one of the first to benefit from the project financed by AFD. In May, he received a new boat and was able to set sail again. He called it "Seroja", or "Always at Sea" in the Bugi language.

© Matahati Productions / AFD
A New Hope
Eli comes from a long line of fishermen who understand the rhythm of the ocean and have learned to live with it. Before the tsunami, she would buy fish from fishermen in her village, sell half of it to an intermediary and sell the other half herself at the market in Palu. When she was not at the market, she spent her days drying fish and shrimp and transforming what was left over into cattle feed. Her husband was a fisherman. "Between my husband and I, we earned about 1,500,000 to 3,000,000,000 Rp (Indonesian rupiah) per month (€93 to €187)," she explains.

She saved a portion of her income every day, which she hid under her mattress, enough to send her 12-year-old son to college. "I wanted my children to have other options than fishing for their future," she says.

But on 28 September 2018, the wave hit her house, taking away all her savings. Since the tsunami, Eli and her family have survived thanks to emergency aid in a temporary shelter at the foot of the mountains. Her two eldest sons were willing to give up their studies to help the family.

When new boats were distributed to local fishermen, Eli could not contain her emotion. For her, beyond the return of the skiffs to the harbor of Palu, it represented the return of hope. "Now I can send my children to school. As long as we have the means to earn a living, we will survive and everything will be fine. "

© Matahati Productions / AFD
Education Saves Lives
Taslim has always lived in the village of Pantoloan Bayo. At an early age, he used to listen to the stories of his elders describing the tsunamis that had occurred in the region. One detail caught his attention: each time, the water withdrew from the beaches a few minutes before the disaster.

So when the ground began to shake on September 28, Taslim immediately went to the beach, sat down and observed the sea. He stayed there for hours with several children, including his grandson, who were playing in the water. When the end of the tsunami warning was announced on television, Taslim followed his instincts and continued to scan the ocean.

Finally, at sunset, he saw the waters flowing back to the open sea, leaving the reef uncovered. "Run! Run to the hills! Run!”  he shouted at all those he met. His persistence and knowledge of tsunamis probably saved many lives.

But in the absence of written documentation, this knowledge, once transmitted orally from generation to generation, is now at risk of being lost. To better prepare for danger when the warning system fails, the project supported by AFD also includes community awareness and simulation exercises in schools, based on local natural disaster history and traditional knowledge.
Mangroves, a Natural Barrier

For as long as Taslim can remember, the mangrove has always been there. No one ever told him the reason why it was there or who planted it. But on 28 September 2018, its presence saved the lives of many people in the region. And for good reason: in the areas where the mangrove forest grows, the height of the waves was reduced from five metres to just one.

"The mangrove saved us. Densely covering a distance of approximately 20 metres down to the shore, it retained the waves and protected our village. Today, it has completely disappeared. But after all these years, we now know what it's there for,” Taslim explains.

The province of Palu is currently in the process of being rebuilt. Aware of the importance of mangrove forests in protecting coastal communities, AFD has placed re-planting projects at the heart of the work to revive regional activity. The aim is to better protect local populations from future disasters.

"We are pleased to contribute to this project," says Emmanuel Baudran, Director of the AFD office in Jakarta (Indonesia). "We hope that this pilot program will help Palu's coastal communities to resume their work and lives and to have a better understanding of potential disasters. "

Financing Green Infrastructure in Indonesia: What Are the Impacts?