© Alain Goulard / AFD
Though little known, public development banks play an essential role in the global economy. With trillions of dollars in assets, they could be all the more consequential in the face of the continuing global health and economic crisis. Here are six things you've always wanted to know about public development banks, but were afraid to ask...

They operate all over the world

There are currently 450 Public Development Banks (PDBs) worldwide, with a total of some $11.2 trillion of assets* in 2018. They operate at all levels: local, national, continental and all over the world through the financing they offer at international level. Some of them have also been set up based on specific religious or political criteria.

While the number of banks are almost equally distributed between Africa (21%), Latin America (22%), Asia (29%) and Europe (23%), their size can differ greatly between regions: African PDBs are small and only account for 2% of total assets. Conversely, China’s three policy banks alone had a total balance sheet of $3,600 billion in 2018, i.e. 32% of the world total for PDBs. The vast majority are national PDBs, with 329 in 2020.
The annual disbursements of PDBs are estimated at $2.2 trillion, i.e. about 10% of global public and private investment.

They invest in strategic sectors

Historically, PDBs have been set up with two objectives: the first is to direct investments towards infrastructure or economic sectors identified as priorities by governments. In the 19th century, a number of national or specialized banks were set up to support the industrialization of Europe and the financing of major infrastructure, such as railways.

Today, certain PDBs play a leading role in the transition of the global economy towards a development path more in tune with the Sustainable Development Goals (SDGs). This includes financing the move towards a low-carbon economy.

The second objective is to offset market imperfections by investing in sectors that private investors consider unprofitable, whereas they are essential to social balances and the proper functioning of the economy. This is the case with education and health, but also social housing, which aims to house the most disadvantaged, and small-scale family farming, which provides an essential economic and social base in many countries.

They play a key role in responding to crises

The 2000s and 2008 financial crisis have increasingly brought back to the forefront the fragility of the financial system and the regulatory role of PDBs. This “countercyclical” mandate is based on two characteristics that set them apart from commercial banks. The first is institutional: as the State is the shareholder of development banks, it can rapidly mobilize budgetary resources for the economic operators that need them most.

The second reason is more structural: Public Development Banks generally lend with maturities equivalent to their resources, meaning they do not have substantial short-term refinancing needs. In the event of high market volatility, they are therefore less exposed than others to the risk of bankruptcy. In times of crisis, this more stable structure allows them to step in until the markets have calmed.

They have a wide range of tools

Public Development Banks have a very wide range of financial tools to support their partners, such as guarantees, equity, delegations of funds from other donors and direct grants to projects. However, loans continue to be the main financing tool. They are contracted by States, local authorities, public institutions and private companies with public service remits.

Further reading: How is AFD Financed?

France is a forerunner

While France has several development banks, the Caisse des Dépôts is probably the best known. This financial institution for social housing was set up in 1816 and is the oldest PDB in the world. Others include the Public Investment Bank for SMEs (BPI), Agence Française de Développement for international solidarity, Local Finance Company (SFIL) for territories and export and Caisse de Développement de la Corse (CADEC) for Corsican SMEs.

For a sustainable recovery, they are needed more than ever

Over €30 billion have been committed in a matter of weeks: “The main objective is to cover business cash flow requirements and maintain jobs in the economic sectors hardest hit by the slowdown in activity”, says Régis Marodon, Sustainable Finance Advisor at AFD. “All sectors, such as SMEs, transport, tourism, energy, industry, trade and services, are potentially concerned.”

The priority given to a rapid recovery of the economy has also initiated a debate on the nature and quality of this recovery. This is why a number of PDBs have also jointly engaged in a reflection process to consider the compatibility between their financing, the international climate agreements and the Sustainable Development Goals (SDGs). The Finance in Common Summit, which will be held from 10 to 12 November 2020 during the 3rd edition of the Paris Peace Forum, aims to strengthen this collective dynamic for more sustainable finance.

Further reading: The Finance in Common Summit: The First Global Meeting of All Public Development Banks

* All the figures in this article are from a database currently being developed with Peking University. 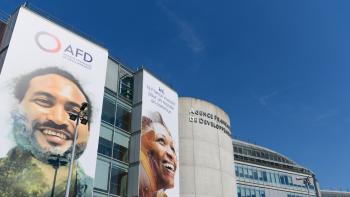 Live from the Trading Floor: How is AFD Financed?