Up until 2014, Ecuador was one of the most dynamic countries in Latin America, but is today seeing its progress threatened by the fall in oil prices and the value of the US dollar. There are many challenges, particularly in the water, sanitation and education sectors. This fragility was exacerbated by the earthquake in 2016… AFD took action to respond to the post-earthquake emergency and is promoting green and inclusive growth in the country.

While Ecuador does not lack water, inequalities in access to water resources give cause for concern: in rural areas, which are home to 40% of the population, only 39% of inhabitants have access to drinking water (against 87% in cities). Water is subject to strong pressure (population growth, urbanization, industry), poorly managed and badly distributed. The Government set out to remedy the “water injustice” by including the “right to water” in the 2008 Constitution.

To ensure access to water resources for all and improve sanitation services, AFD is assisting the country via several actions:

The Government of Ecuador has made improving the national education system a priority. The education reform aims to increase access and student attendance and achievement, improve teacher training and take better account of special education needs.

To contribute to achieving these objectives, AFD is supporting the Escuelas del Milenio program, which comprises the construction and refurbishment of school complexes with a capacity to receive students from nursery school through to the Baccalaureate, on the same site with all the necessary facilities. Through this project signed in 2017, AFD is mainly targeting the refurbishment or reconstruction of existing buildings, respecting quality standards, often in rural and remote areas.

These new schools ensure that there is high-quality public education: indeed, special attention is paid to teacher training and educational teams, but also to the development of teaching materials. There is also an innovative aspect: the promotion of the Amerindian culture.

The 7.8 magnitude earthquake which hit the provinces of Manabi and Esmeraldas on 16 April 2016 had major social and economic consequences in the country: 671 people missing, some 35,000 people homeless and approximately USD 3bn of damage. Over 1,000 public facilities were hit (health centers and schools), a number of Ecuadorians lost their jobs and they have not all been rehoused yet. Following an official request from the Ecuadorian Government, AFD set up a response to the consequences of the earthquake via two loans:

The Government of Ecuador is implementing a proactive policy to transform the energy sector. The objective: modify the energy matrix, by increasing the share of renewable energies in the domestic mix via the construction of hydropower plants, use electricity as a replacement to gas for domestic consumption and develop the transmission and distribution grid in order to reduce technical losses.

On 30 July 2015, AFD allocated a USD 100m loan to the Government of Ecuador to support the national strategy. The objective: support Ecuador’s growth by promoting a more reliable and more effective energy distribution system. The financing will strengthen electricity distribution grids and implement the Programa de Cocción Eficiente. This program aims to replace gas cookers with low-consumption electric induction cookers, in order to reduce the use of imported non-renewable energies, while promoting the consumption of energy produced at national level.

Guayaquil, the capital of Guayas Province, is Ecuador’s most populous city with 2.3 million inhabitants, according to the 2010 census. In 2017, AFD allocated a USD 114m loan to the Municipality of Guayaquil to set up an urban cable car project – a low-carbon mode of transport. The objective: contribute to sustainable urban development in the metropolitan region of Guayaquil, by opening up the Municipality of Durán thanks to this cable car system, which will cross the natural barrier of the River Guayas. This will facilitate access to jobs and services in the city center for the residents of Durán.

AFD supports NGO action in the fields of agriculture and food security (Agronomists and Veterinarians Without Borders), human rights (Childhood Without Bars program with BICE) and economic integration (Groupe Développement – Acting For Life).

Following the earthquake, AFD launched a call for projects to respond to the emergency. We are consequently supporting new NGO initiatives:

Ecuador is located between Colombia and Peru and bordered by the Pacific. Up until 2014, it was one of the most dynamic countries in Latin America with strong growth, in particular driven by public investments, which were themselves financed by oil revenues. Thanks to the dollarization of its economy in 2000, the country has achieved its macroeconomic stabilization and engaged in its structural transformation, which is marked by dynamic public action in both the infrastructure sector – with a focus on energy infrastructure to reduce its dependence on oil – and in the social, education and health sectors.

However, this progress is today threatened by the fall in oil prices and the value of the US dollar. The massive earthquake in April 2016 also compounded the country’s situation. The country faces major challenges, particularly in the sectors of water and sanitation, education, agriculture, gender equality and the fight against climate change.

Ecuador has an exceptional natural heritage and is one of the world’s biodiversity hotspots. This wealth needs to be preserved: the 2008 Constitution consequently gives rights to nature via the concept of “buen vivir” (“living well”) and focuses on development choices in harmony with the environment, citizen participation and the equitable distribution of wealth.

AFD has been operating in Ecuador since 2015 and has committed USD 560m via six loans to public entities in the water and sanitation, energy, post-earthquake reconstruction, education and transport sectors. It has also mobilized EUR 10m in the form of European Union LAIF grants. In addition, it took action, on an exceptional basis, following the earthquake in 2016 in order to respond to the emergency. 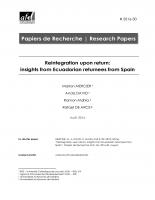