Facility for Refugees in Turkey (FRiT) - The EU funds delegated to AFD increased to EUR 214.8 million for municipal infrastructures in Turkey

Water and Sanitation Sustainable Cities
Near and Middle East Turkey

In the framework of the second tranche of the Facility for Refugees in Turkey (FRiT 2), AFD signed an agreement with the European Union Delegation to Turkey on December 18, increasing the amount of delegated funds to EUR 214.8 million from the initial amount of EUR156 million. AFD is contributing with a loan of EUR 63 million. Thus, the total amount of the Action is of the order of EUR 277.8 million.

With the operational and financial intermediation of İlbank, the bank of municipalities, these funds will be implemented in projects of drinking water supply and sanitation, as well as solid waste management, within the framework of 19 projects in 8 provinces close to the Syrian border which host a high proportions of refugees.

A total of 890,000 people will see their access to water improved while 1.9 million will benefit from improved access to sanitation. In addition, 2.3 million people will have access to improved solid waste services. Alongside these social impacts, the projects will also benefit the environment: each year, 22 million m3 of drinking water will be saved thanks to the improvement of infrastructure and 4.5 million m3 of wastewater that were previously spilled into nature will be treated. 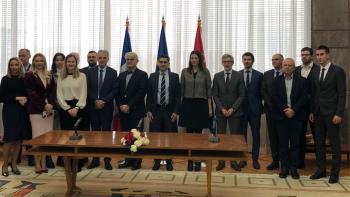 330 Million Euros to Support Social and Ecological Transition in Bangladesh