Climate
Eurasia and Beyond Vietnam

Philippe Orliange, Executive Director of Geographies of the Agence française de développement (AFD) Group, visited Vietnam on 12 and 13 May 2022 to meet with several Vietnamese ministries. The objective was to discuss France’s support for the commitments made by Vietnam at COP26, and to define AFD’s intervention priorities and future support.

Vietnam is one of the countries in the world most severely affected by climate change and natural disasters. Rising temperatures and sea levels and an increase in the frequency and intensity of extreme weather events combined with population growth and intense urbanization increase the risk of coastal erosion, urban flooding and drought in the territories.

France, through AFD, has been supporting Vietnam for many years in defining its strategy and implementing projects to fight climate change: over the past five years, 500 million euros have been committed for nearly 20 projects. Philippe Orliange’s visit was an opportunity to affirm AFD’s willingness to further strengthen this support in the face of challenges, and to accompany Vietnam in defining the best possible trajectory to implement its commitments and in particular to support a just energy transition of the country.

Philippe Orliange met several ministries, including Nguyen Thanh Nghi, Minister of Construction, among others to sign an agreement on operational cooperation with the Urban Development Agency on urban resilience issues. He also met with Tran Quoc Phuong, Deputy Minister of Planning to discuss the expectations and priorities of the MPI on the new support that AFD could provide to the implementation of the Green Growth strategy; Vu Thi Mai, Deputy Minister of Finance, to take stock of current projects and expectations vis-à-vis AFD to accompany the energy transition and adaptation to climate change and Le Cong Thanh, Deputy Minister of MONRE, on the new support that AFD could provide to the public policy dialogue on the national climate change strategy. He also spoke with Tran Tuan Anh, President of the Central Economic Commission, Pham Thanh Ha Deputy Governor of the Central Bank and Tran Dinh Nhan, Director General of EVN. He reiterated to them AFD’s commitment to mobilize the range of tools at its disposal to support a just transition in Vietnam, not only in terms of funding, but also on public policy dialogue and technical support.

More specifically, AFD presented its offer to support public policies, both on macroeconomic topics with the GEMMES model and its French-Vietnamese research teams, on adaptation topics, notably through the WARM facility (funded by the European Union) and an important AFD portfolio in this sector, but also for mitigating the impacts of climate change, through long-term support to EVN in Team Europe format and the development of urban mobility in Hanoi with the financing of metro line 3 and finally on the promotion of green finance.

“Vietnam announced ambitious commitments at COP 26 in Glasgow in November 2021 to accelerate and strengthen the fight against climate change. France stands alongside Vietnam and supports its implementation, thanks not only to financial but also technical support from the Agence française de développement,” said Nicolas Warnery, Ambassador of France to Vietnam.

"I am delighted by these fruitful meetings with our various Vietnamese partners. France and AFD are fully mobilized to support the country in the face of the challenges posed by climate change. The signing of an agreement with the Ministry of Construction on urban resilience is a concrete example of this collaboration, which should be further strengthened in the coming years", said Philippe Orliange. 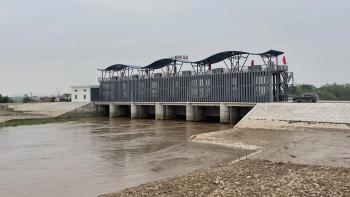