Le port de Beyrouth © Wael Kanj / Mercy Corps Lebanon
Employment
Eurasia and Beyond Lebanon
Lebanon :
Urgent Support given to
Crisis-Stricken Local Businesses
254
businesses supported
$710,000
already distributed
90%
of supported businesses still in operation
In the aftermath of the Port of Beirut explosions, supporting the network of small local businesses was deemed essential in a country experiencing recurrent political, economic and health crises. The financial support provided to businesses by AFD Group, in partnership with the NGO Mercy Corps, has contributed to the gradual restructuring of the country’s economic landscape. Below is a report from the Lebanese capital to mark the International Micro-, Small and Medium-sized Enterprises Day (MSME) on June 27.

On August 4, 2020, the explosion in the Port of Beirut devastated part of the Lebanese capital. During this major crisis, exacerbated by economic stagnation, financial chaos and an alarming health crisis due to Covid, it was vital to launch an emergency response, tailored to the needs of a traumatized community. Due to the lack of resources supplied by the Lebanese government, civil society, NGOs and international aid associations were required to step in.

In the wake of the disaster, Agence Française de Développement (AFD), in partnership with the NGO Mercy Corps, created a fund to support very small and medium-sized enterprises (MSMEs) affected by the explosion. The fund, which amounted to a total of €1,000,000, took the form of an unconditional cash transfer, and was granted between September 2020 and the fall of 2021. The program enabled 254 incredibly vulnerable local businesses to remain in operation.

The financial support provided by AFD to small businesses left vulnerable by the crisis, has helped many of them to avoid bankruptcy, increasing the resilience of the local economy.

By supporting small businesses weakened by the crisis, the financial support provided by AFD has helped many of them to avoid bankruptcy, and has strengthened the resilience of the local economy. 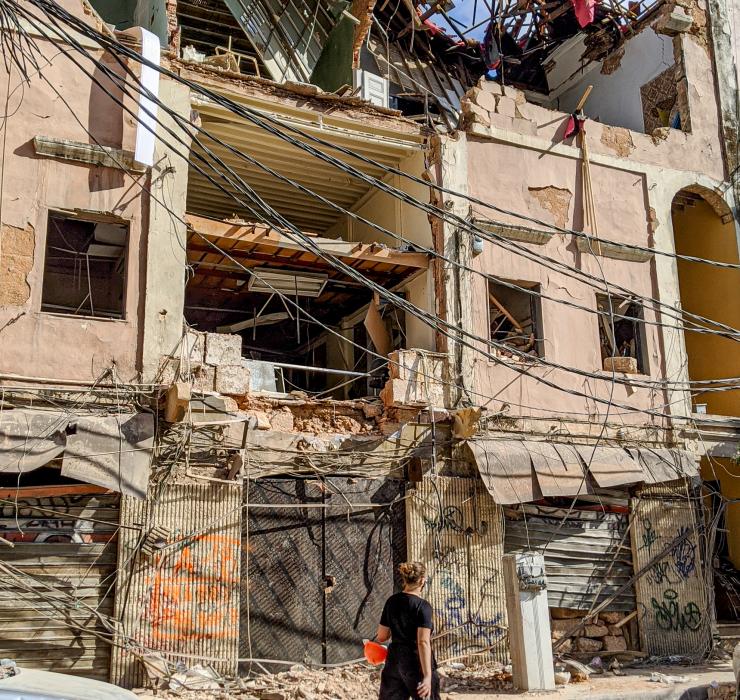 © Kassim Dabaji / AFD
TARGETING COMPANIES’ NEEDS TO ADAPT SUPPORT
With thousands injured, hundreds dead, and homes and businesses destroyed for miles around, Abbas Fadlallah, Manager of the Beirut Emergency Response Project for Mercy Corps, was profoundly affected by what he saw on that tragic day: “The efforts of people’s entire lives were wiped out in a matter of seconds. Victims lost their homes and businesses, and the banks seized their savings". Together with eight other international NGOs, Mercy Corps put together an ad hoc team to assess the damage on the ground and determine the most urgent needs, not only those of business owners but also of communities. “We had to act fast! The Lebanese pound was rapidly devaluing and essential products, such as medicine and gasoline, were running low. We urgently organized meetings with 1,300 business owners, mainly shopkeepers, between the end of August and the end of September 2020.”

To continue its assessment, Mercy Corps created a database of each owner’s urgent needs based on the size of the business, the number of employees, and the extent of the damage. According to this assessment, 76% of the MSMEs questioned placed an unconditional cash transfer at the top of the list of their emergency support needs.

© Kassim Dabaji / AFD
UNCONDITIONAL CASH SUPPORT
In November 2020, Mercy Corps launched a direct, unconditional cash transfer program, distributing grants ranging from $2,500 to $4,500 per business. "The cash payments allowed the targeted businesses to meet their urgent needs, freely choosing the expenses necessary for their survival," explains Julia Pantigny, program manager at AFD. In a context of crisis and strong devaluation of the Lebanese pound, which has lost more than 90% of its value in two years, these funds without conditionality have enabled entrepreneurs to finance emergencies and maintain economic activity. This assistance has sometimes positive positive into the private sphere."

For Jeffrey Shannon, Mercy Corps' director of programs in Lebanon, the approach of granting money without strings attached can be questionable. Widely tested and deemed effective by the NGO in crisis situations, this cash transfer solution, in addition to being very flexible, helps restore the confidence of beneficiaries. "At the beginning, people were suspicious: nobody gives money for free. They were surprised when someone came up to them and said, 'Here's some cash! Use it to pay for your most urgent needs. You can spend it on your health, pay for school, pay off debts..." This approach seems to be paying off because over 90% of the businesses that received this help have survived.

© Mercy Corps Lebanon
SMALL BUSINESSES, THE HEART OF COMMUNITY LIFE
Lebanon has suffered crisis after crisis for three years, and the psychological burden is heavy. For Jeffrey Shannon, "there is a sense of hopelessness and fear. If, on top of that, the local grocery store, the butcher and the hairdresser close, it will only add to the suffering of the residents. And we can't achieve long-term development if people lose hope now."

This reasoning explains why the program has focused on small businesses, whose goods and services are essential to the community. "If we had supported large companies at the expense of small and medium-sized businesses, entire neighborhoods would have been affected by their closure," says Jeffrey Shannon. Julia Pantigny agrees: "The project targeted small businesses affected by the crisis, taking into account their vulnerability and the jobs that could be maintained. By enabling these SMEs to emerge from their slump without filing for bankruptcy, this financial support contributed to the resilience of the local economy and its gradual restructuring." 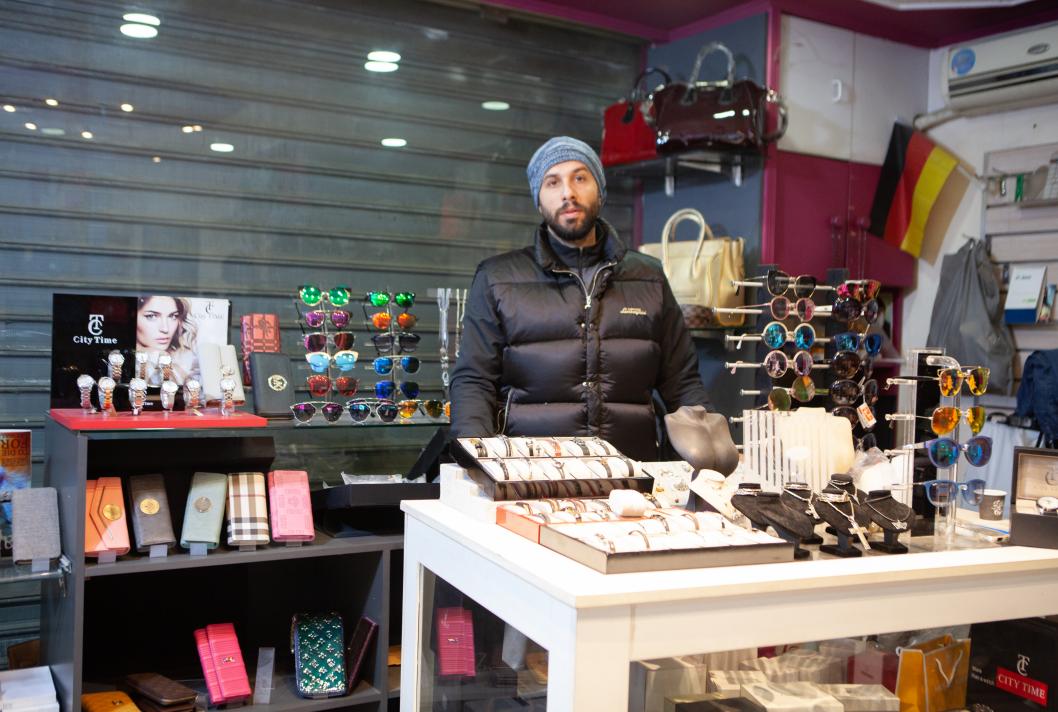 Photo credit: © Kassim Dabaji / AFD
“WITHOUT THIS SUPPORT, I WOULD’VE BEEN FORCED TO CLOSE”

Sarkis Sevadjian is 40 years old. For the past 11 years, he has owned a bag and fashion accessories store in the popular Armenian district of Bourj Hammoud. He was outside his store when the blast occurred. “I wasn’t hurt, but the storefront and most of my goods were destroyed,” says Sarkis. “Broken glasses and watches, ripped bags and fabrics, everything was ruined.” In order to resume trading, the shopkeeper had to urgently repair his store window and replace the damaged merchandise. “The NGOs came one after another to survey the damage, but they didn’t offer me an immediate solution. When Mercy Corps offered me a cash sum, I couldn’t believe it. I thought it was an empty promise until I received $3,800 just two months after the explosion.”

With this support, Sarkis was able to replace his storefront, buy new stock and pay off his debts. “Without this support, I would’ve been forced to close. With the banks freezing our capital, there was nothing we could do. We needed cash in foreign currency to buy imported goods, and save our business.” Today, with the help of Mercy Corps, Sarkis has been able to keep his business going.

“OUR BACKS ARE STILL AGAINST THE WALL”

Najat Chemali runs a household goods store in the affluent neighborhood of  Ashrafieh. “For 25 years, my business was doing great. The explosion destroyed my house and my store.” Najat lost all her stock: “French cast iron pots, German pottery, Portuguese porcelain. The loss was estimated at over $4,000.” She was also unable to access money from the bank. So, Najat Chemali had to sell her jewelry to repair her house. “The government aid never arrived. The army came and drafted an assessment of the damage and then, that was it! The same goes for the insurance companies which are still waiting for the results of the investigation.”

Najat Chemali received financial support of $2,800 in cash, which she used to pay for repairs to the storefront, renovate the shelving, and fill the holes in the walls. She also used a portion of the money from the sale of her jewelry to reopen her business. For the moment, however, importing new goods is not an option. “I’m trying to sell the remaining stock. Things are getting better, but I feel like our backs are still against the wall.”

“I NEEDED CASH IN A STABLE CURRENCY TO GET BY”

Mona Lago runs a clothing store in Basta, a popular district in West Beirut. As a result of the financial crisis in 2019, the business where her husband worked ran into difficulties. The clothing store provided the family with a minimal income, until the port explosion destroyed everything.

That particular day, Mona’s two young daughters were in the store. “They were unharmed, but they were emotionally traumatized. After the explosion, I was experiencing such mental fatigue that I wanted to leave my country.” There was not much left of her store: “Everything was damaged, the tables, the storefront, the clothes and accessories.”

One day Mona saw a Mercy Corps team passing by, and she went to talk to them. “I couldn’t repair anything. I didn’t have any money or strength left. My hands were tied.” With Mercy Corps’ financial support, she was able to reopen her small business. “Prices started to skyrocket and the Lebanese pound was plummeting. I needed cash in a stable currency to get by. I used the AFD grant to replace the store window, tables, chairs and goods.”

Today, Mona has transformed her clothing store into an accessories store, the realization of a long-held dream.

Nada Khoury and her husband Freddie launched Neo Gourmet in 2013. With a prosperous high-end pastry, bakery and snack business, employing 26 staff, the couple had even been planning to open a franchise in Kuwait. However, because of the economic crisis, they were forced to downsize and returned to their Ashrafieh site in Beirut. On August 4, 2020, the company’s warehouses, store and kitchen were severely damaged by the explosion and Freddie was injured. Nada recalls that day: “The air conditioning wasn’t working. With temperatures of over 40°C, the food quickly spoiled and we lost three quarters of our stock. The economic situation made it difficult to restock and we had to close for a month.”

The Mercy Corps team came to assess the damage in this district, which had been severely impacted and deserted by its residents. “The NGO assessors were keen to try our croissants and bread... But even the bread cutting machine was broken”. After receiving a $2,000 grant, Nada and Freddie replenished some of their stock of raw materials, repaired the air conditioning and bought a new bread cutting machine.

While customers have begun to return to the neighborhood, since early 2021, today Neo Gourmet’s main problem is the lack of electricity, which is strictly rationed, particularly at night. “We can’t prepare croissants for the next morning anymore. So, we’ve adapted to find a new business model.” To manage their electricity problems, the Khourys now operate their business with three employees and food is only made to order, online or by phone, 24 hours in advance. Here’s hoping that better days lie ahead.