© InterHolco
AFD is joining a whole new venture aimed at reconciling biodiversity conservation and local socioeconomic development in the Northern Congo forest basin. Through dialogue and partnerships, local people and village communities are going to be increasingly involved in forest management, through the Northern Congo Forest Landscape Project.

It is one of the most prized ecosystems of our planet: the Republic of the Congo forest basin. It's the second largest in Africa, with a total of 22 million hectares of forest, and amounts to almost 60% of the country's territory. It is also one of the areas in Central Africa that is currently home to the largest population of forest elephants, as well as lowland gorillas in the West. These two species are threatened with extinction.

AFD has been taking action for 30 years to preserve this area of inestimable value, which are among the lungs of the continent. Alongside successive governments and specialized scientific organizations, AFD contributes to establishing a consolidated legal framework to govern the management of forest resources, promote their certification and support conservation efforts in its network of protected areas.

Building on these achievements, AFD is proposing a new approach to reconcile biodiversity conservation and socioeconomic development. It is working with the Republic of Congo’s Ministry of Forest Economy, the Wildlife Conservation Society (WCS), the French Agricultural Research Center for International Development (CIRAD), local communities and certified forest managers in Northern Congo.

This is the purpose of its €6 million financial contribution and the €1.5 million from the French Facility for Global Environment (FFEM) to the Northern Congo Forest Landscape Project (PPFNC), which is being implemented in the Sangha and Likouala departments and the northern part of the Cuvette-Ouest department. It covers a massive area of some 9.5 million hectares, where local communities and indigenous people live alongside logging sites (7.6 million hectares of forests), protected areas (1.8 million hectares) and agricultural and mining concessions.

This multitude of uses, combined with high population growth and the lack of a clearly defined territorial development framework, increases the threat to biodiversity, and to large wild animals in particular. Indeed, there has been a marked development in large-scale poaching, driven by the high price of ivory.

Some forest managers have engaged in the process to obtain FSC (Forest Stewardship Council) certification, a standard internationally recognized for its socio-environmental requirements. However, independent studies show that a number of managers do not fully respect Congolese legislation and their own commitments to forest development plans validated by the Ministry of Forest Economy. The decentralized administration, for its part, does not yet have the human, technical and financial resources required to adequately monitor compliance with the forest development plans by all the companies in the area.

Including civil society and people in the management of the basin

Analyses of AFD’s intervention framework in the forest sector prompted it to gradually adapt its scope of action. “Local people are now the priority focus of our technical and financial operations”, says Mathieu Auger-Schwartzenberg, project team leader in AFD’s Agriculture, Rural Development and Biodiversity Division.

This is a real paradigm shift for AFD, whose action had until now focused on establishing forest development plans. “For the first time, we won’t only provide support to certified forest managers,” he said. “We’ll be providing much more comprehensive support to strengthening governance in the area, by including all the stakeholders, forest managers, the Government, as well as civil society organizations and people.”

Based in Ouesso, the capital of Sangha department, Émilie Perreard, a technical assistant for the project, will be responsible for building a dialogue with indigenous people and village communities. Her objective? “Jointly build a number of community development activities in forest concessions.”

Towards a more equal sharing of forest revenues

The PPFNC ultimately aims to achieve a more equitable sharing of forest revenues. It wants to ensure that they also contribute to the development of activities that benefit local communities and indigenous people, in line with the sustainable development objectives of Sangha, Likouala and the northern part of Cuvette-Ouest.

“The project’s overall mission is to ensure the preservation of all biodiversity, as well as an ecological balance,” says Alain Nonouka Gomat, national coordinator of the Northern Congo Forest Landscape Project.

The expertise of a number of civil society organizations with a longstanding commitment to forest sector governance will be mobilized to map the needs of people. The Ministry of Forest Economy, for its part, is currently developing an environmental and social plan to collect data on the living conditions of local people and the status of biodiversity.

“Before deploying and implementing agricultural or management activities, consulting the people is an essential prerequisite,” says Séverine Demerre, project officer for Forestry, Agriculture, Environment and NGOs at AFD. “It will allow us to set up a strong monitoring and evaluation mechanism for the activities, to be implemented and adopted by local communities.”

Another priority is tackling large-scale poaching. The French Facility for Global Environment and AFD have each provided €1.5 million to assist the Government, WCS and forest managers with conservation efforts. With training, equipment and the intervention of experts, this financing will help in the fight against wildlife crime and establish a sustainable multi-partner legal framework to support the Congolese authorities. 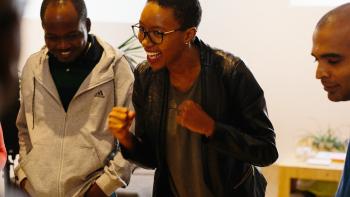 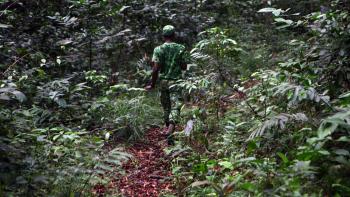 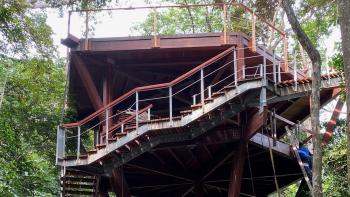 Gabon: A Classroom in the Trees