Romain Chabrol / AFD
The state of the oceans reflects the health of our planet. Millions of people’s lives and livelihoods depend on clean, healthy oceans, as does precious marine life. To meet the rising environmental, social and economic challenges tied to oceans, Agence Française de Développement has set sail in a new direction, in line with France’s commitments. AFD’s Fisheries and Ocean Project Manager, Hélène Gobert tells us more. 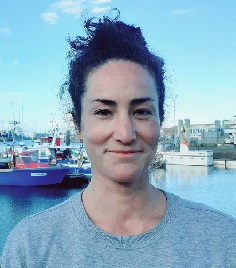 Why is the ocean important for organizations involved in development?

Hélène Gobert: The ocean can be seen as critical for many Sustainable Development Goals (SDGs). As an important source of protein, it contributes to the food security of 3 billion people. It also plays a key role in the balance of the climate system. It absorbs both 90% of excess heat in the atmosphere and nearly 30% of the carbon dioxide generated by humanity. As the biologist Françoise Gail says, the ocean makes our planet habitable.

Some marine and coastal ecosystems are also crucial for strengthening the resilience and adaptation of coastal and island populations to extreme climate and geological events. Finally, the ocean is a source of significant economic activities, such as transport, coastal tourism and fishing. These sectors provide jobs for 10% of the world’s population, mainly in developing countries.

The ocean is essential to us but subject to multiple pressures like overexploitation of resources, pollution, and climate change. All these imperil the services it provides. Until now, the ocean has been mostly left out of development policies and projects! Too often, ocean issues seem tiny compared to land issues. But that’s mostly because they’re harder to see, as the ocean is made up of huge, distant, and poorly known spaces. We’ve long considered it as an infinite body that absorbs unlimited waste and possesses inexhaustible resources. But that’s an illusion. It seems to me that any development stakeholder working towards achieving the SDGs must now consider the ocean and preservation of the services it provides at its true value.

What is AFD doing for the oceans?

The history of AFD is closely linked to the sea: since it was created it has worked for the development of the communities, administrative departments and territories of Overseas France as well as of coastal and island countries. Today, if we look at projects that depend on the ocean, AFD has done a lot: it has provided nearly €5 billion of financing over the last ten years, for 250 projects. That represents about 5% of AFD’s total activity. Our activity is therefore very broad, but also very multifaceted.

We have two main types of ocean-related actions. One deals with conservation, space management, and improved governance, which benefit the oceans. The other concerns the development of maritime transport, port development, tourism, and urban development on major rivers. These projects are beneficial in terms of employment and wealth creation, but sometimes less so in their environmental effects. Their potential impacts are mostly poorly understood and little known. Finally, the connectivity of marine ecosystems and their vulnerability to cumulative pressures are not sufficiently taken into account.

How to do better and more?

We think that the issue of compatibility between coastal development and the good health of the oceans is a matter of fundamental importance today. All our actions must be consistent with one another. This is a new path, but one in line with the international agenda on biodiversity, climate, oceans, and France’s commitments in this area.
A climate COP qualified as “blue” was held for the first time in 2019. Preserving the services provided by the ocean was a core issue at those discussions. This will again be the case for the major events in 2021: the IUCN (International Union for Conservation of Nature) Congress and the biodiversity COP. International momentum on oceans is building up, and France is fully engaged in it. For example, our country recently committed to classifying 30% of its Exclusive Economic Zone (EEZ) as marine protected areas by 2022.

Restoring the balance between preserving the good ecological status of the ocean and its multiple uses by humankind is now one of AFD Group's strategic priorities. That’s why we encourage the development of a sustainable and inclusive maritime economy, sometimes referred to as the blue economy. This strategy is based on the principle that the ocean is a global subject interacting with many sectors of action, including transport, sanitation, tourism, and urban development. To support these sectors, we must therefore study their “blue” dimension. This means we have to strengthen our risk mitigation approaches and promote projects with positive environmental co-benefits.

Climate, biodiversity, and ocean in this way become a triangular foundation to structure AFD Group actions. This is a new direction. It may seem obvious, but it’s full of many difficult implications. AFD was moreover one of the first donors to adopt such a position.

What will this new direction lead to in concrete terms?

AFD will adopt strict guidelines so that projects with the most harmful impacts on marine environments can be quickly rejected. An example would be those promoting mass tourism or the cruise industry. Standards will be stricter and rating systems (Sustainable Development Analysis and Opinion) will take into account the degree to which projects affect the ocean, and how. This is an essential step.

We must also work to better understand project impacts – especially the cumulative ones – and how to offset any possible negative effects. To properly apply the “avoid, reduce, offset” sequence to coastal areas, which guides the work of many donors, we’ll need to conduct research. We will then need to facilitate the creation of baseline data, monitoring, and ways of measuring the ex-post impacts of marine and coastal ecosystems projects. This will be accompanied by estimation of the value of ecosystem services rendered or lost.

We will also encourage an eco-systemic approach and co-management of marine and coastal areas. It is to develop global, sustainable, and inclusive governance, similar to the “territorial” approach for land-based projects. When applied to oceans, this involves intersectoral planning of activities within a defined area using methods or tools such as Integrated Coastal Zone Management (ICZM) or Marine Spatial Planning (MSP).

AFD Group will also adopt the 14 principles for financing the sustainable blue economy developed by the European Commission, the European Investment Bank, and the WWF. Our subsidiary Proparco, dedicated to private sector financing, will use these to ensure that all of its financing is consistent with the sound management of marine spaces.

This new direction allows us to determine priorities and a clear line of action for our teams, partners, and counterparts. Little by little, all of the Group’s actions will be brought into line with the reality of ecosystems and the development opportunities they represent. Against a backdrop of growing awareness about the cumulative pressures on this environment, and in line with the international agenda of negotiations, the position of the ocean in AFD’s activities has finally been rethought to meet the challenges.