Sustainable Transport on Track in Peru

© Christian Bellazzi / Flickr
An initiative in Peru, in which old, public vehicles are being sent to the junkyard to make room for new, less polluting buses and vans, is getting a boost. AFD, KfW and the European Union are providing a €5.4 million grant for the program to send old vehicles, known as “chatarreos” to the junkyard as part of an effort to develop sustainable and intelligent transport systems.

The grant from the European Union's Latin America Investment Facility (LAIF) will be used to fund research and technical support to help provincial communities in the country, which fall within the scope of the National Program for Sustainable Urban Transport (Promovilidad).

This financing will be used by the Peruvian Ministry of Transport and Communications to implement measures that will facilitate the improvement of public transport in cities through sustainable urban mobility plans and intelligent transport systems. It will also be used to finance the second engineering study for the country’s first tramway in Arequipa - a project AFD has been working on since 2018 and to which it has contributed €1.5 million.

“AFD has been providing support to the transport sector in Peru since 2016,” says Laurent Pacoud, AFD Director in Peru. “It’s been working with the government to develop the National Program for Urban Transport and establish efficient, integrated and sustainable urban transport systems in the country’s cities, a process that has already taken place in a number of Latin American cities, such as Medellín, Guayaquil, Santo Domingo and Rio de Janeiro.”

The content of this publication is the sole responsibility of AFD and does not necessarily reflect the views of the European Union. 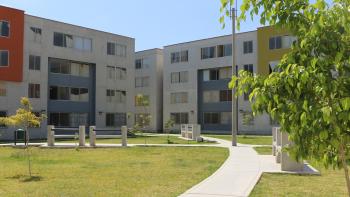