© Bénédicte Desrus / AFD
Latin America is one of the regions with the highest economic inequality in the world. Moreover, Mexico shows one of the highest levels of such kind of inequality within the region. Even public official data report a decrease in such level for the last 25 years, such reduction was less than insignificant. It has to be noted, as well, that right now an academic and public discussion related to potential underestimation of economic inequality is taking place in the country.
Context

In Mexico, more than 40 percent of the population is under the official poverty line. In the same time, Mexico is characterized by a society in which the socioeconomic origin condition is highly related to life achievement, especially on the extremes of the socioeconomic distribution (Vélez-Grajales et al, 2014). On this matter, empirical evidence shows that once the population is divided by quintiles, 48 out of 100 that were born in the lowest quintile stay there for the rest of their lives. Above the rest of them, i.e. those who are able to move to another quintile, 22 reach the second quintile. In summary, previous result leaves in poverty 70 percent of those with origin in the first quintile. It has to be noted that only 4 out of 100 that were born in the lowest quintile will move up to the top quintile.

This project is part of the first phase of the Research Facility on Inequalities, coordinated by AFD and funded by the European Commission's Directorate-General for International Partnerships over the 2017-2020 period. The first phase of the Facility has led to the conduct of 22 research projects and the publication of around 100 research papers and policy briefs.

How economic inequality and social mobility are related? Is it possible that the highest levels of socioeconomic persistence (lower social mobility) in terms of origin determined, in part, both perception and tolerance against economic inequality? The Mexican case, which is one where socioeconomic regional disparities are significant, represents a good option to analyze if such relationship holds. Moreover, there is still a gap in the literature for explaining the mechanisms behind the observed negative relationship.

Additionally, an important and relevant unanswered question for the Mexican case is the perception of Mexicans about inequality and social mobility levels. What if Mexicans think that the country is one of equal opportunities and results for all? Policy implications should be different among different perception scenarios. In any case, it is necessary to get information in order to understand the mechanisms at household and local level that explain the potential distance between perception and reality.

First, using a multivariate analysis method, relative intergenerational mobility can be estimated for each macro-region of the country. Several inequality measures will be estimated, but for several points in time. The researchers have chosen to do so because it is possible that not current but origin economic inequality is the relevant one for intergenerational social mobility. Once the relationship is estimated, a discussion on the mechanisms behind it should be developed. The empirical analysis will be mainly based on the “Encuesta ESRU de Movilidad Social en México 2017”.

Additionally, work with groups in 4 different cities with different levels of socioeconomic performance will be held. The researchers expect to do fieldwork in at least two different spots within each city: one for a group of medium-high socioeconomic level and one of medium-low socioeconomic level. The interview will include a measure for both inequality and social mobility. In such a way, the researchers will be able to understand in a better way the relationship between perceptions and objective measures on the variables of research interest.

You may find the research papers and the policy briefs linked to this project here :

Find the presentation of the research paper "Perceptions of inequality and social mobility in Mexico" by Aurora Ramirez Alvarez (Colegio de Mexico) during the first webinar of the Research Facility on Inequalities: 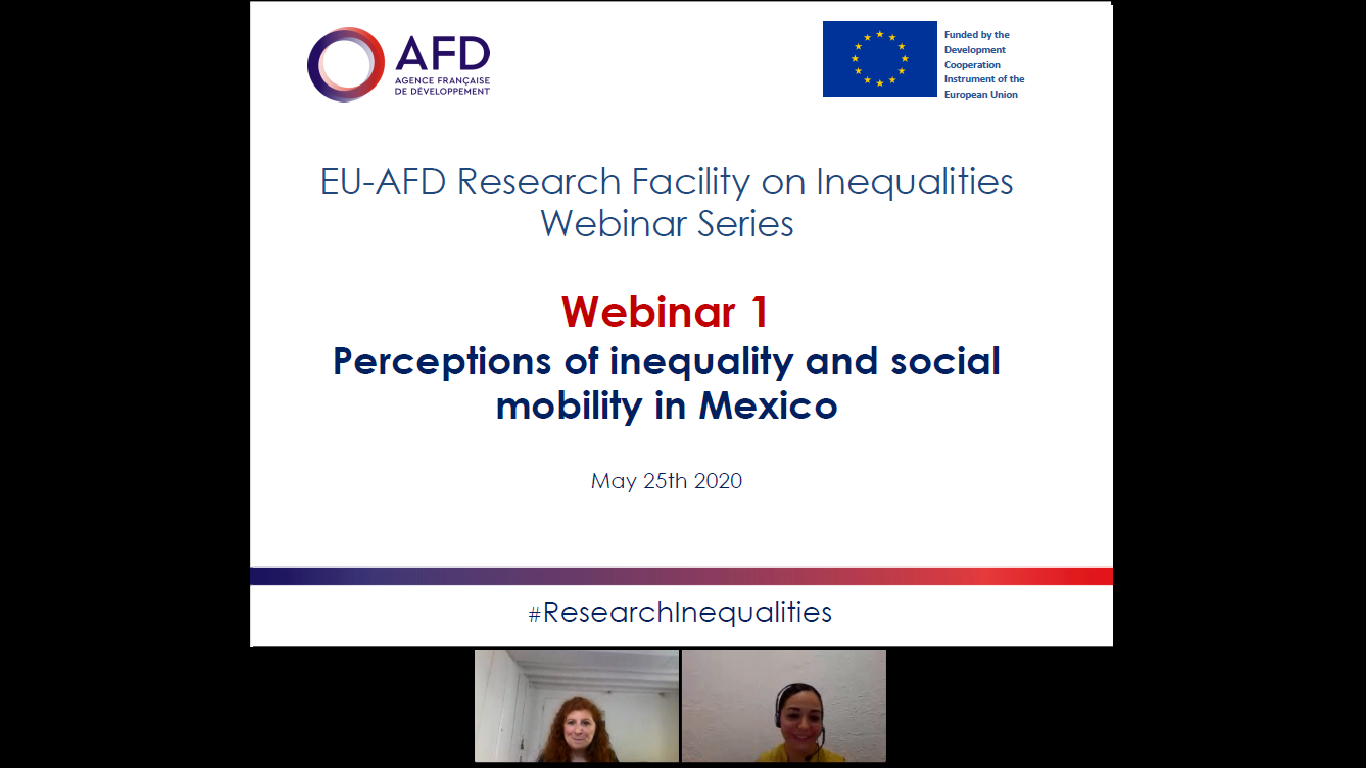 Understanding social inequalities in Mexico
Social mobility is very low in #Mexico. Understanding in a better way the relationship between perceptions and objective measures concerning the Mexican case: a #research project led by @elcolmex, @ceeymx , with @AFD_en & with the support of @EU_Commission. #ResearchInequalities