Improving Access to Drinkable Water in Dakar - Despite Demographic Pressures

© AFD
World Water Week, which ends this Friday, August 27, highlighted projects around the world aimed at universal access to drinking water. Of growing concern are the effects of urbanization and the increasing demographic pressure on water in large cities, such as Dakar. In response to the lack of sufficient water, a veritable coalition has formed to raise the finance necessary for sustainable improvements to the water sector.

In Dakar, the capital of Senegal, President Macky Sall inaugurated on July 10 a third drinking water treatment plant, to date the largest hydraulic structure ever built in the country.

The third plant in Keur Momar Sarr – the so-called “KMS 3” – plays a major role in supplying drinking water in Dakar and the surrounding area, some 200 km away. The water is pumped from Lake Guiers in northeastern Senegal, then treated, and finally transported through water pipes, until it reaches residents’ taps in the capital. This program is the result of a fructiferous cooperation between several technical and financial partners, which mobilized an overall budget of 433 million euros, including 108 million euros in loans allocated by AFD.

The investment responds to the lack of sufficient local drinking water resources in the Senegalese capital. Strong demographic growth in Dakar, coupled with economic activity, also exerts significant pressure on ageing infrastructure, leading to the saturation of water production and transfer facilities.

A strong increase in capacity

Even so, the number of households suffering from intermittent drinking water service has already started to decline with the entry into production of the third plant. It will be able to produce 200 million liters of water per day. First though, current work on the storage and distribution infrastructure will have to be completed. The increase in drinking water production and transfer capacity will improve the continuity of service for one million people in the capital and extend access to drinking water to an additional 680,000 people.

“The sector has made significant progress since the first institutional reform in 1995 with almost universal access to drinking water and the development of collective sanitation networks,” says Mai-Linh Cam, AFD’s Environment, Rural Development and Water Manager in Senegal. “But more needs to be done in the sanitation, quality and availability of water. Senegal is mobilizing considerable resources for this, with the help of its partners, in particular AFD, which is co-financing the implementation of the KMS 3 plant. "

This project will also benefit the environment: it mobilizes surface water resources which will have a positive impact on the preservation of the water table by phasing out its overexploitation. These are all positive signs in the approach to the ninth World Water Forum, to be hosted by Senegal in 2022. 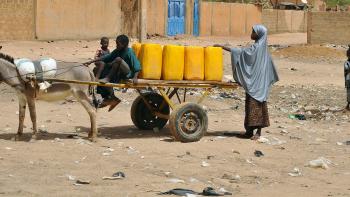