Colombo, Sri Lanka © Didier Gentilhomme / AFD
The World Urban Forum organized by UN-Habitat, the United Nations Human Settlements Program, is being held in Katowice, Poland, from 26 to 30 June. Audrey Guiral-Naepels, Deputy Director of the Urban Development, Town Planning and Housing Division at Agence Française de Développement, tells us about the issues this forum will be addressing and AFD Group’s action for housing and investments to build sustainable cities.

What issues will the World Urban Forum in Katowice be addressing?

Audrey Guiral-Naepels: This gathering organized by UN-Habitat brings together specialists in the urban and development issues faced by cities every two years. This edition is being held in Poland and will certainly focus on Europe and the issues arising from the crises, given the very close situation of the war in Ukraine.
France, in particular through the voice of Agence Française de Développement (AFD), will be taking the messages of the New Urban Agenda there: support for the development of more inclusive, productive and climate-resilient cities, with the aim of achieving the United Nations’ Sustainable Development Goal n° 11.

How does AFD Group take action for housing in developing countries?

A. G.-N.: AFD has been operating in this field for 70 years. Over the last ten years, it has allocated €1 billion in foreign countries to support sustainable housing programs, €2 billion when the French Overseas Territories are included. It’s a theme for which we have high added value, in terms of both experience and financial tools to support the various stakeholders.

The housing sector poses a huge economic challenge. At the same time, it’s one of the sectors which must reduce its greenhouse gas emissions the most. It’s a major driver for social development. Yet the sector is today neglected by donors, despite the fact that it’s been brought back to the forefront by the Covid-19 pandemic. Indeed, following recommendations like “Stay home”, “Keep a distance” and “Pay attention to your hygiene” requires having accommodation of adequate size and with access to water.

In AFD Group, we work on making the housing issue an integral part of an urban development that takes into account the diversity of needs and the necessity of a low-carbon transition in cities, while being financially sustainable. In practical terms, this involves financial support for the production of buildings that are energy efficient and affordable for low-income households, as well as for thermal rehabilitation. We have tools for this, such as the Program for Energy Efficiency in Buildings (PEEB), which allows us to finance feasibility studies, and the Sustainable Housing Initiative (SHI), a €3.2 million multi-country facility to finance technical assistance for local and national public authorities responsible for housing issues.

How to remove the barriers to investment of cities?

A. G.-N.: Cities in developing countries are faced with unprecedented urban growth: five million new city dwellers settle in them every month. What took a century in Europe is happening in 20 or 30 years in Africa. It’s even faster than what China has experienced. This leads to the creation of precarious neighborhoods, a concentration of many people seeking economic opportunities and urban sprawl. There are huge investment needs to absorb these new urban dwellers and produce the basic facilities they need. But cities often only have very limited institutional competencies and State funding to develop their territory.

We address this problem in several ways. Firstly, by supporting decentralization processes at the national level, so that all cities of a certain size see an increase in their budget allocations, or benefit from new competencies. We also directly finance projects conducted in cities. This may seem anecdotal, but many cities don’t have control over the projects conducted in them because they are often led by sectoral ministries. We also support financial institutions that finance cities, in particular in South Africa and South America.

To support this dynamic, we’ve launched the Cities and Climate in Sub-Saharan Africa (CICLIA) fund for the preparation of projects with climate co-benefits, along with the European Union and Swiss cooperation. Through this €12 million fund, we’ve supported 38 cities and subsequently financed and co-financed some €800 million of projects. We’ll also be launching a second phase of CICLIA in 2023 for about 40 cities. We want cities to be more sustainable and actors in their territory.

Further reading: Kenya: Tailoring a City to its Residents 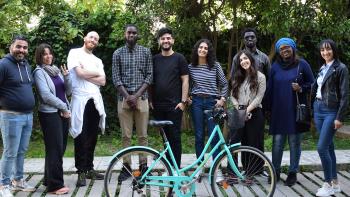