© Dominic Chavez / World Bank
Led by the University of Ghana, this research project focuses on inequalities in Ghana, where they remain at important levels although this country has experienced rapid economic growth and significant reduction in poverty levels in recent times. Beyond a diagnostic study on inequality, this project analyses the changing dynamics in this country from a spatial, gender and ethnicity perspective. It also includes a focus on the relationship between economic inequalities and inequalities in education opportunities.
Context

Ghana has experienced rapid economic growth and significant reduction in poverty levels in recent times. However, the reduction in poverty has not translated into a reduction in inequality. Coloumbe and Wodon (2007), and also Cooke et al. (2016) recognise the spatial inequality that exists in the country, manifested particularly in the differences in income levels between the northern and southern parts of Ghana. Evidence by Oduro et al. (2011) and FAO (2012) also point to persistent gender inequalities relating to access to and control of assets as well as access to secured and less vulnerable employment.

This project is part of the first phase of the Research Facility on Inequalities, coordinated by AFD and funded by the European Commission's Directorate-General for International Partnerships over the 2017-2020 period. The first phase of the Facility has led to the conduct of 22 research projects and the publication of around 100 research papers and policy briefs.

This project will draw on and consolidate this evidence-base and then fill some important, policy-relevant gaps that remain. By design, the research program outlined below seeks to address distributional issues in both the bottom half and the top of the distribution. The work program recognises from the outset that there are several dimensions of human development and wellbeing, and progress in some measures might be accompanied by deterioration in others. It recognises that economic growth does not necessarily lead to equitable outcomes – both poverty and inequality have self-reinforcing characteristics that are hard to counter.

The research project will be developed across three work streams:

Find the presentation of the research paper "Exploring the dynamics of micro- level consumption inequality in Ghana" by Nkechi Owoo (University of Ghana, ACEIR) during the sixth webinar of the Research Facility on Inequalities: 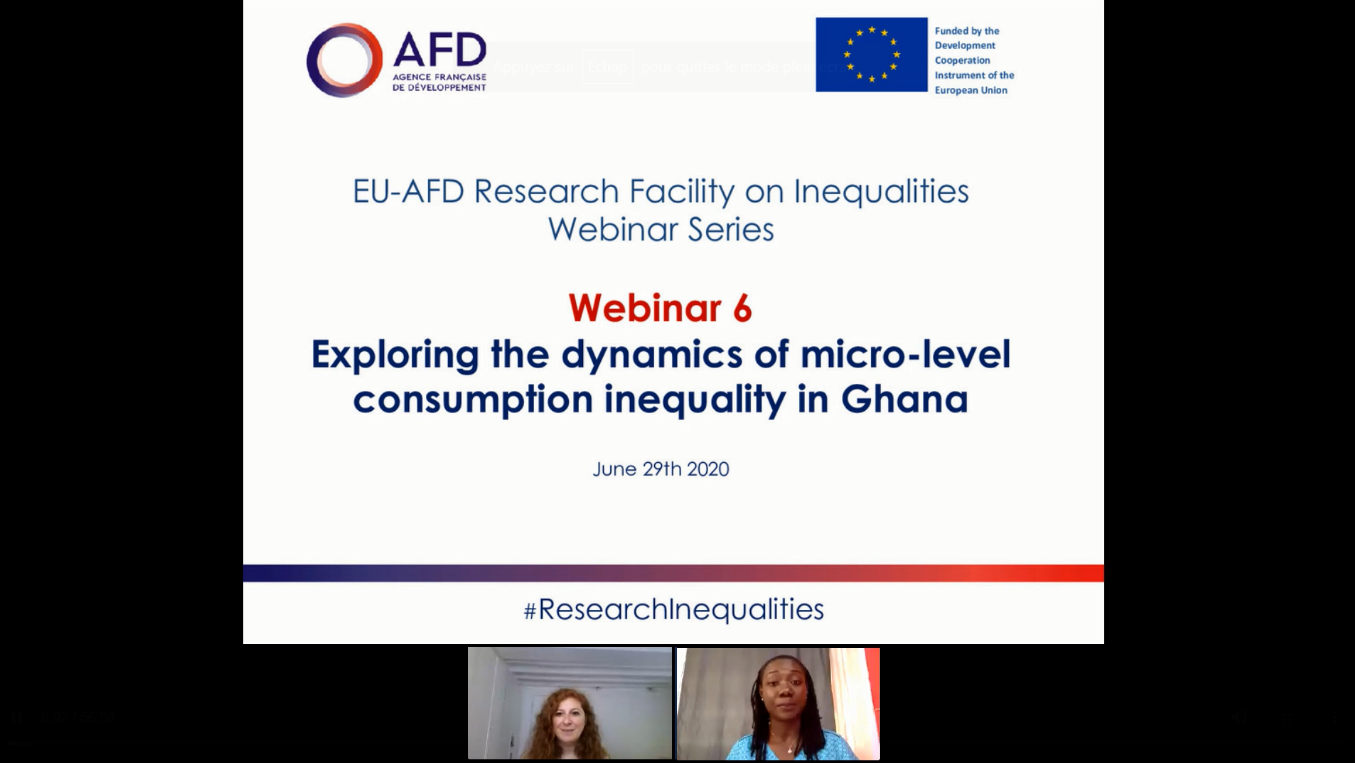 Understanding the role of spatial approaches and #informality in the fight against #inequality in #Ghana: a #research project led by @UnivofGhana & @AFD_en, with the support of @EU_Commission. #ResearchInequalities