By your side
Find out more

when ? where ?
3:10pm-7:25pm
To mark AFD's 80th anniversary, a special event will be broadcast live online on December 2. It promises to be a kind of polyphonic concert, where words, emotions and points of view from all over the world are shared, ensuring a mutual attentiveness, conscious interaction and a fruitful exchange of ideas.

For nearly a century, we have been supporting solidarity actions all over the globe, close to the grassroots. We are by your side: you, who live all over the planet, speak other languages, and see the world through different lenses. Your destiny is tied to our own, now more than ever.

This anniversary is an invitation to listen and think about the future, to co-develop for the next 80 years, and to weave productive relationships, across all the regions where the AFD Group is active. 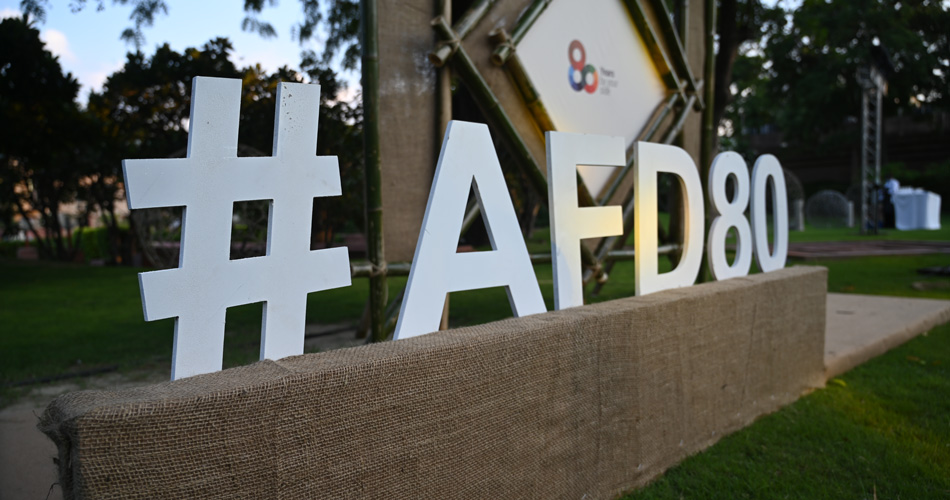 Aware of the past and open to the future, AFD Group is celebrating 80 years “by your side,” to seek answers to the question: “From yesterday’s independence to today’s interdependence, how can we build a world in common by 2101?”

We’ve asked a wide range of personalities to help us seek the answers to this question. Partners, beneficiaries, members of civil society from here and elsewhere: they all responded to help make our 80th anniversary a high point of listening and dialogue.

Speakers: Rémy Rioux and Asha Sumputh
The day’s events will be launched with the screening of a film that is at once historical and a forecast of the future, and which tracks the successive reinventions of AFD Group and the development policies that underline its commitment to being by your side. In their introductory remarks, Master of Ceremonies Asha Sumputh and AFD Chief Executive Officer Rémy Rioux will provide a glimpse of what’s to come, including the sharing of personal experiences from around the world in all their diversity, richness and complexity.

Speakers: Séverine Kodjo-Grandvaux, Achille Mbembe, Rémy Rioux
We revisit the history of relations between France and Africa and beyond, between the West and the Southern hemisphere. In a series of short videos, poets, historians, scientists, philosophers, business owners, activists and free thinkers from France, Europe, Africa and around the world share their view of the future and their priorities for the next 80 years, spanning a vast spectrum of what is possible for our planet.

Our partners and clients will stage three dynamic 5-minute presentations on actions and projects supported by AFD Group around the world. These projects are emblematic of AFD Group’s work in a number of regions, and of the innovative solutions being collectively developed.

Singer and Musician: Dom La Nena
Now, time for a live show! It promises to be a moment suspended in time, where Dom La Nena, along with her cello and other instruments, take us on a dreamlike trip from her native Brazil to the numerous musical lands through which she has journeyed. A crowd favorite!

Speaker: Esther Duflo
A look back at the first year of the Fund for Innovation in Development (FID), chaired by Esther Duflo. This initiative supports innovations that help reduce poverty and inequality worldwide. Through financing, the Fund enables innovative research teams to test new ideas, take strategic risks, demonstrate what works and deploy solutions that have the most positive impact, on a large scale.

Artists: Jul, Alaa Satir, Clémence Sauvage and Bedouin Burger
Dedicated to youth here and around the world, this multimedia presentation features artists drawing in real time, pictures that provide illustrated answers to the question, “What will it be like to be 25 years old in 2101?” The live show is created in partnership with the Angoulême comic strip Festival, featuring two young comic drawing talents, Alaa Satir and Clémence Sauvage, along with French cartoonist JUL.

Among the speakers who will participate at the event:

Find out more about all the speakers, and read their biographies on the event website.

Present in 115 countries, AFD Group relies on a network of field offices to be close to our partners and funded projects. In September, AFD’s field offices began – each in their own way – to organize events locally with clients and partners, as part of AFD Group's 80th anniversary.

India
A debate was organized on September 28 at the Résidence de France with experts, researchers and authors such as Yamini Aiyar, Professor Krishna Achutarao, Vivan Marwaha and Krishna Achutarao. On the agenda were exciting discussions about the world as they imagine it and desire it to be in 2101. It was also an opportunity to discuss the importance of climate change mitigation, sustainable cities of the future and the role of technology, and artificial intelligence in particular. 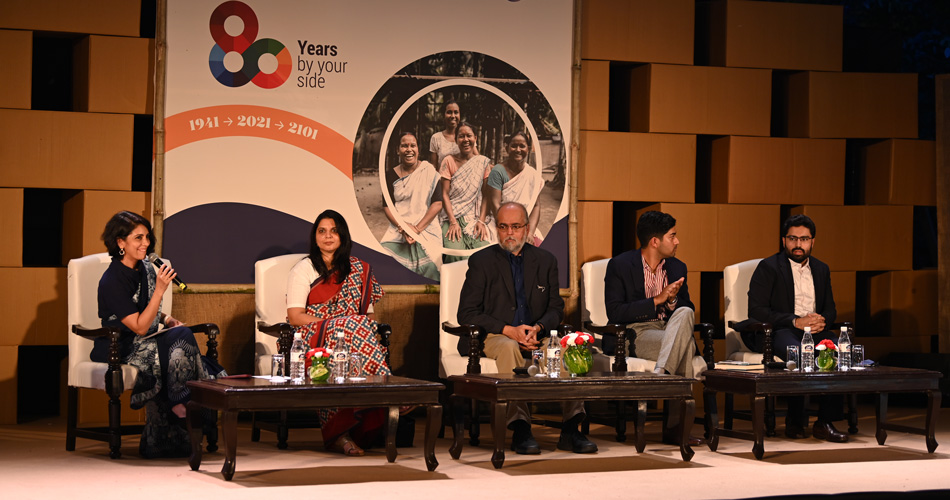 Find out more about this event

Côte d’Ivoire
A roundtable debate was organized on October 12 at the French Institute in Abidjan, featuring speakers renowned for their contribution to development in the region. Gertrude Koné Kouassi, President of the Commission for digital economy and digital enterprises of the CGECI (Ivorian employers) and Christophe Cottet, AFD director for Ghana and Liberia, joined Séfora Kodjo, Ivorian activist for the leadership of African women and founder of the SEPHIS Foundation, as well as Andy Costa, African cycling ambassador. Their discussions focused on developments in recent years on the impact of digital technology, environmental issues and the role of women in achieving the Sustainable Development Goals. 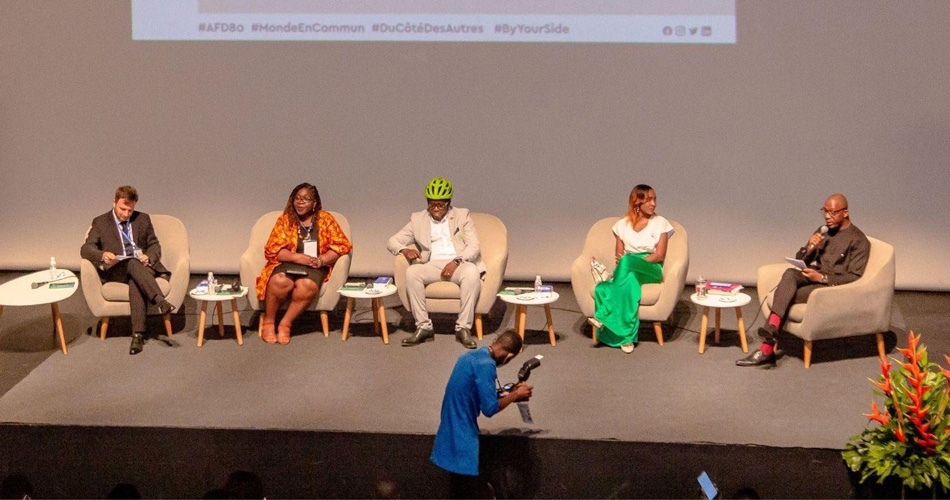 Find out more about this event

AFD’s Bolivia office launched a call for artistic projects at the end of August around the theme of AFD's 80th anniversary: ​​what kind of world in common will we have in 2101? The selected works as well as photos of AFD projects around the world are part of a traveling exhibition since October 18, 2021 in the four branches of Alliance Française across the country (Santa Cruz, Cochabamba, Sucre and La Paz). 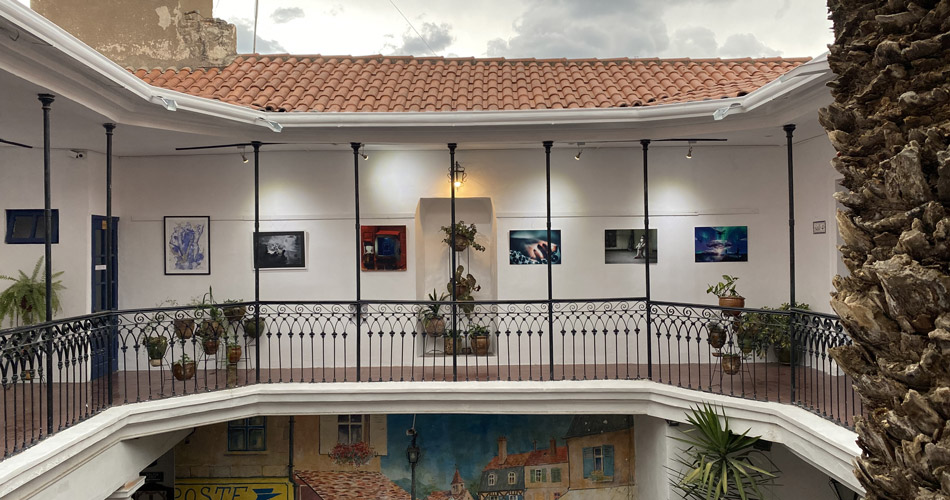 On this occasion, discussions around AFD's action and the country's issues were organized in each of the Alliance Françaises, with representatives of companies, local authorities, NGOs and cultural partners. The culmination of this anniversary will take place in mid-December: a reception will be organized by the French Embassy in the presence of representatives of Bolivian ministries, civil society and technical and financial partners.

Celebrations were organized both in Istanbul and Ankara with the Group's key partners in this country, be they representatives of Turkish local authorities, institutions, other donors or actors in the private sector. 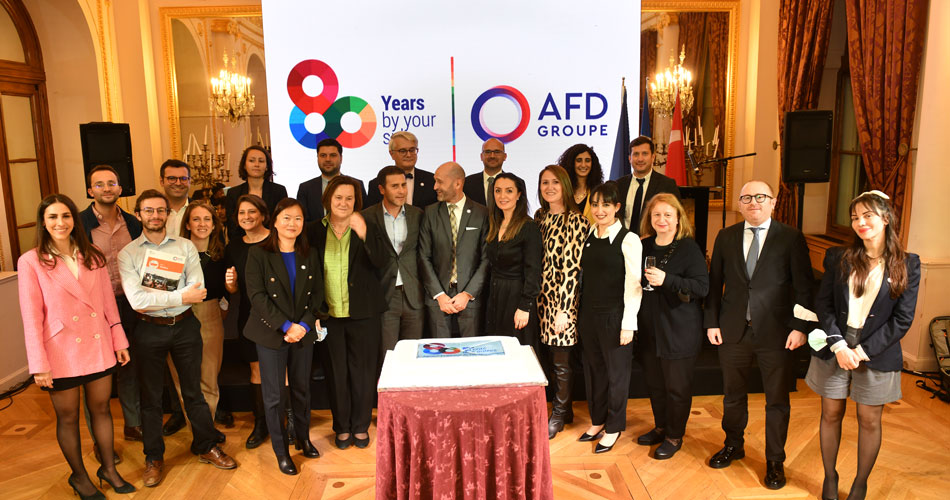 A round table was organized in Ankara on November 29 on the theme of “climate smart cities”, in which the mayor, the president of the Union of Municipalities of Turkey, experts and business representatives participated.

A roundtable was organized on November 30 on the theme "How to build a sustainable Vietnam by 2101" Researchers, representatives of civil society and the private sector reflected on the actions necessary to promote green growth in Vietnam.

As an introduction to the round table, the artist Nguyen Thi Hoai Giang presented his vision of the world in 2101: “Life in green is a triptych that depicts a world where man protects the environment and finally lives in harmony with nature."

AFD’s 80th anniversary: A look back at the Group’s history – and the challenges ahead

80 years "by your side" - The ceremony replay

Location of the event