© C. Dupenloup
Organized by the urban cultural hub "La Friche la Belle de Mai" and AFD Campus, the international symposium on “Cultural Third Spaces, Towards New Means of Cooperation between Africa and France” will be held in Marseille on 17 May 2022. The objective is to pool ideas and analyze the latest thinking on how to make the most of cultural third spaces in Africa and France. This interview with Charles Houdart, AFD's Cultural and Creative Industries Project Manager, sheds light on the building of a program that AFD Group will lead over the next four to five years.

A third space is a location other than home and work, and which can be places where lively cultural and artistic events take place. AFD Campus seeks to “stimulate the creation of learning ecosystems”. How can cultural third spaces contribute to this? 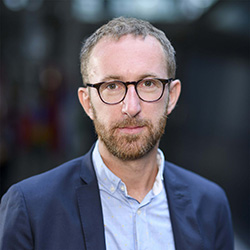 Charles Houdart: At AFD Campus we’re convinced that cultural third spaces are conducive to sharing different experiences, methods and approaches, and therefore innovation. Through their diverse activities, these third spaces are a melting pot of cultural actors, activists, creators and members of the public. It’s about breaking down the usual barriers found in other institutions.

We also focus on the strong local dimension and the geographical impact of cultural third spaces, and they appear to be a particularly effective vehicle for training, pedagogy and discovery. It’s also in this spirit of sharing insights and emulation that we decided to gather the managers of third spaces from a number of African countries (Côte d’Ivoire, Democratic Republic of the Congo, Mali, Morocco, Mozambique, Rwanda, Senegal, South Africa and Tunisia) and their French counterparts.

Are cultural third spaces in France and Africa similar?

CH: The term “third space” is not used very much in Africa. But in many countries, there is a strong demand for more of this type of space dedicated to transdisciplinary expressions, such as dance, visual art and audiovisual production. These spaces are designed to be reception centers for a wide range of people, including artists who put on cultural events outside conventional settings. For AFD Campus, it involves supporting the emergence of “learning territories”. This notion is reflected in our slogan “Learn New Skills Differently”. However, few public authorities in African countries are able to provide long-term support to cultural third spaces, which therefore turn to approaches based on international financing.

What do we hope to see emerge in the third spaces?

CH: First, to create a dynamic of interaction and sharing between African cultural operators to stimulate their networking and promote a dissemination across the continent, second, overhaul the principles of cultural cooperation between France and Africa, based on a less dominating and less one-sided constructions. For example, this could lead to a common and horizontal programming between third spaces in France and Africa.

This will become a reality on May 18 at La Friche la Belle de Mai, in Marseille, the day after the discussions on the 17th. Workshops will bring together a dozen or so managers of African cultural third spaces, their French counterparts and members of AFD to jointly build the bases of an ambitious support program for the next four to five years. It’s a way for AFD Campus to apply the slogan of AFD Group's 80th anniversary, “By Your Side”, by devising a framework at the center of which are the main people concerned, and where the discussion takes their needs into account.