Inequalities and environmental changes in the Lower Mekong River Basin

© Greg Mo / AFD
This project proposes a systematic analysis of the inequality-environmental change nexus in the Lower Mekong River Basin Region. It aims at building scientific base for policy action as well as identifying uninvestigated research questions. In addition, case studies on relevant fields in Vietnam, Cambodia, Laos and Thailand, representing existing or ongoing researches undertaken by the research network (WANASEA - "Strenghten the Production, Management and Outreach Capacities of Research in the Field of WAter and NAtural Resources in South-Est Asia" - and IRD) will form a collective book on the topic, together with the systematic review.
Context

Mekong River Basin is crucial for the livelihoods of millions of people of six countries: China, Myanmar, Lao PDR, Cambodia, Thailand, and Vietnam. The last four countries are categorized as the Lower Mekong Basin, where two thirds of the population relies on the water resources for subsistence agriculture and fisheries as well as to develop other activities such as transport and tourism. The current anthropogenic causes for environmental degradation in the region include the construction of dams, over-extraction of underground water, pollution from fast developing cities, deforestation, sand extraction, and other activities which create risks to human settlements that were even unheard of ten years ago. More often than not, the impacts of changes vary between groups of people and strongly informed by the social inequalities. Climate change adds to this ongoing environmental degradation by increasing the region’s fragility. For example, one meter of sea-level rise would cause displacement of 7 million inhabitants and flood the homes of more than 14.2 million people in the Mekong Delta.

These major anthropogenic degradations take place in a specific regional and global socio-political context. On the one hand, an accelerated rural transition has been pushed by national governments with the idea of integrating the agricultural sector into the global markets, but also under the pressure of global financial markets searching for returns in the aftermaths of the financial crisis. This rural transition occurs at a pace that fragilizes the economies when they cannot absorb the workforce in excess into the developing industrial or services sectors. In this respect, the Mekong region is a spectacular example of the economic and environmental consequences of the 2008 financial collapse on developing and emerging economies. On the other hand, the countries of the Mekong region are also subjected to the geopolitical shift putting China in the center of a new globalized system. Most of them contribute heavily to this new dynamics, which also severely impacts their environment and inequalities altogether.

For years, international and local organizations, South-East Asian governments as well as bilateral and multilateral development banks have been working to help the Mekong countries mitigate these impacts. However, the lack of a systematic review of existing knowledge in the Mekong makes it difficult to evaluate the impact of specific actions on inequalities and environmental quality. At a moment when governments (both regionally and globally) call for urgent actions, it is time to consider a systemic approach to the environment - inequality nexus in the region.

This project is part of the European Facility for a research program on Inequalities in Developing and Emerging Countries, which is coordinated by the AFD. Financed by the Development Cooperation Instrument of the European Union, this facility enables to implement 20 research projects over the 2017-2020 period, in partnership with donors and research centers from the South to the North.

Rising inequalities and accelerating environmental changes are two of the most significant challenges of the twenty-first century. But how do they relate to each other? Do they have common dynamic factors? This research project proposes a specific regional study on how these multidimensional variables of inequality and environmental changes relate and interact with each other. It aims at building scientific base for policy action as well as identifying uninvestigated research questions

Throughout the region, socio-economic inequalities relating to income, employment, education, access to land and other services, as well as demographic differences, such as age, gender, ethnic, and so on are more and more associated with unequal exposure to environmental risk factors. These factors can represent direct threats to people’s lives (landslides, flooding, etc.), or contribute, in an indirect way, to the degradation of agricultural land, propagation of diseases, or, more widely, health issues (air pollution, etc.). They often put already disadvantaged groups at significantly higher risk for environmental effects. Besides, the existing inequality might also contribute to the environmental changes.

Environmental risk factors considered in this project are not solely linked to global climate changes. They are also (and, for the moment, most often) the direct consequences of the growing pressure of human populations and the economic dynamics on the ecosystems. This is particularly visible throughout the Mekong River Basin. The Mekong region has been radically transformed in the last ten years by the pace and scale of large-scale land acquisitions through foreign and domestic investments leading to growing inequalities, rural unrest, and a process of simplification and commodification increasingly replacing traditional and natural systems. The spatial scope of analysis cannot thus remain purely national.

At this stage however, it seems difficult for the local or national decision maker, let alone any regional institution, to take science-based action, as long as no mapping of this scattered knowledge exists, highlighting the diverse quality of the studies, their data sources, their representativeness, the needs for further studies or on the contrary the well-established results. Scoping and systematic reviews, a technics initially coming from the field of medicine, can provide with such a dashboard instrument.

Beyond the project, an objective would be to build a research and capacities research project mobilizing the main academic and non-academic actors in the Southeast Asia region on the research directions which would have emerged from this systematic study.

First, we will conduct a preliminary scoping review of the related scientific and grey literature on inequalities and environmental changes in the Lower Mekong region. The resulting literature and data repository created by the review can be of use to researchers and stakeholders interested in the topic. As such, it represents a scientific result and output that can be published in a first scientific paper. It also represents a crucial first step for the two co-implementing partners in the region, who represent a broad network of interdisciplinary researchers in the four countries of the Lower Mekong River basin, and who intend to develop broader research programs based on this scoping review.

Second, we will develop a systematic review. In this second step, quality filters apply, it involves data extraction as well as quantitative analysis. This step requires the work of a full time post-doc, helped by experts in the different fields represented in the scoping review, and possibly the help of documentalists from the different represented countries. It is thus crucial to be able to gather the expertise of a network of researchers and operational experts already working in the different dimensions of the subject. This is what the WANASEA network, combined with the IRD network in South-East Asia as well as experts from AFD in the region, the Mekong River Commission (MRC), the Compagnie Nationale du Rhône (CNR), the World Wildlife Fund (WWF), and the IUCN will allow to convey. This expert committee will commit to contribute a few days in the year to help the post-doctoral expert taken the right decisions in the filter of data, methods and papers.

As a third step of the project, we propose to develop four case-studies which would shed the light on different existing research programs which already studied some aspects of the relation between inequalities and environmental changes along the lower Mekong river basin, from Laos to Vietnam.

The first results of the project will be presented for the international conference on “Climate impacts in South-East Asia” in Quy Nhon (Vietnam) in march 2020. They will lead two at least two research papers and a collective book.

The final results will be presented at the ASEAN Water Platform (WANASEA) in the summer 2020 in Chiang Mai University (Thailand).

Find the presentation of the research paper “Inequalities and Environmental changes in the Mekong region: a scoping review” by Huynh Thi Phuong Linh (IRD in Ha Noi) during the seventh webinar of the Research Facility on Inequalities: 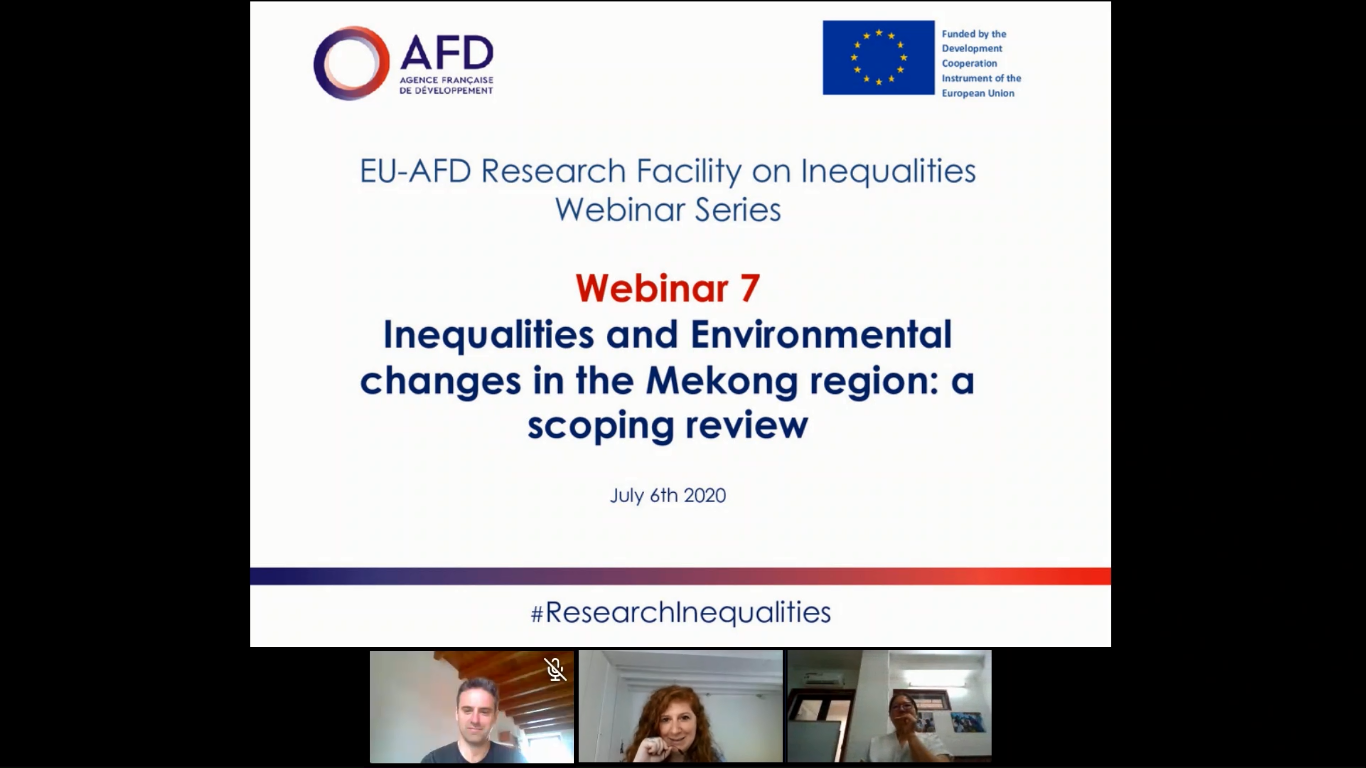 You may find the research papers here:

The WANASEA website
Building a dashboard of environmental inequalities in the Lower #Mekong region. A key issue for science based public policies and framing the right research questions, thanks to researchers from WANASEA and @ird_fr with @AFD_en, and the support of @EU_Commission. #ResearchInequalities