In the Pacific, Restoring Ecosystems for Local People

South Pacific islands depend heavily on their land and marine ecosystems for their food and economic resources. But these ecosystems are suffering from effects of climate change, through storms, floods, and rise in sea level. When these are combined with environmental pressure linked to human activities, the result is serious degradation of the natural environment and consequently, significant social and economic impact.

AFD and the French Global Environment Facility (FFEM) have provided the RESCCUE project (“Restoration of ecosystem services and adaptation to climate change”) with €8.5 million in funding. The dual objective of this grant is to enhance preservation of local ecosystems and increase the resilience of these small island States and territories.

Between 2014 and 2019, seven pilot sites spread across Fiji, New Caledonia, French Polynesia, and Vanuatu benefited from this project coordinated by the Pacific Community. Each site has developed activities linked to its own ecosystem: fighting invasive species, sustainable fishing, reforestation, sustainable tourism, and others.

In Fiji, a 110-km² marine reserve was established to protect the country’s largest coral reef and marine ecosystem zone. In Ra Province, also in Fiji, the 100,000 seedlings planted to restore coastal mangroves are helping to protect nearly 5,000 residents from cyclones. “In New Caledonia, the RESCCUE program has made it possible to identify the financing needs of 13 protected coastal and land zones, so that they can be given the resources to achieve their goals,” says Catherine Lecouffe, Head of the Ocean Project at AFD.

In Togo, a New Landfill for Cleaner Oceans

It is estimated that 10 million tons of plastic waste end up in the ocean each year. The plastic remains in the sea for dozens or even hundreds of years (a plastic bottle takes an average of 400 years to degrade) – or at least long enough to poison or entangle more than 100,000 marine mammals each year.

To fight the curse of plastic waste in the ocean, AFD, the European Investment Bank (EIB), and KfW (AFD’s counterpart in Germany) launched the Clean Oceans Initiative in the fall of 2018. Its aim is to encourage projects to prevent pollution produced on land from reaching the sea.

One of the projects involves improving the waste collection system in Lomé, Togo. “Several initiatives are being carried out simultaneously. We are raising public awareness about recycling and composting, increasing the number of voluntary waste drop-off points, training municipal workers in charge of waste collection and management, and purchasing new equipment,” says Catherine Lecouffe.

The capital of Togo, with its population of 1.4 million, is already making full use of a new landfill capable of treating 250,000 tons of waste per year. The landfill and its new sorting area were both developed over the last 10 years with AFD support. A separate landfill was also upgraded to reduce its environmental impact.

This project has already helped reduce the amount of plastic waste dumped in the streets and that flows into the Atlantic Ocean via discharge channels.

See also: The Clean Oceans Initiative, One Year On

In Morocco, Fishing for Best Practice

Fishing is an key sector in Morocco. It provides not only a significant source of protein for the people of the country, but also 600,000 direct and indirect jobs. The fishing sector also contributes 2% to Morocco’s GDP.

In 2009, in order to develop the production of small-scale and coastal fishing, Agence Française de Développement provided a €27million loan and a €1million grant for a program to upgrade the equipment of the National Fisheries Office (ONP), the public enterprise in charge of marketing the sector’s products in Morocco.

This program has enabled the construction of three fish markets – in Larache, Mehdia, and Tangier – that have helped improve the quality of fishery products, increase the share of products sold, and consequently reduce post-harvest losses. About 18,000 fishermen and fish wholesale traders have directly benefited from these investments. Since 2008, the average value of products at first sale in these three new fish markets has increased by 43%.

The result: a greatly improved economic situation for fishermen, with the coastal and small-scale fishing sector having enjoyed an overall increase of 75% in turnover. In parallel to these actions, Morocco’s Halieutis Strategy has worked to improve the sustainability of resource management. For example, the Moroccan Ministry in charge of maritime fisheries estimates that 96% of unloadings were managed sustainably in 2018, compared to 5% in 2007.

In Mauritania, a Fund to Preserve Marine and Coastal Biodiversity

Approximately 90% of the world’s nature reserves and parks have to endure human activities incompatible with goals set for their preservation, due to a lack of means to control these areas.

Until recently, Mauritania’s Banc d’Arguin National Park (PNBA), one of the largest protected areas in Africa, was no exception. It enjoys exceptional natural heritage and has very ambitious preservation goals, but it had been struggling to cope with the external threats of overfishing, oil exploration, construction of a gold mine, urban sprawl, and others.

In response, AFD and the FFEM were among the first contributors to the BACoMaB trust fund created in 2009. “The various players invest the funds on ethical and socially responsible financial markets. The interest generated is then used to finance the protection of biodiversity in Mauritania’s marine and coastal reserves,” says Catherine Lecouffe.

As a result, officers in charge protecting the PNBA against illegal fishing are able to spend nearly 3,000 hours at sea and to intercept numerous motorized dugouts, which are prohibited within the park. It has also enabled the scientific committee to meet regularly to monitor the risks of marine pollution and trends in fish stocks. An additional benefit is that local people’s concerns on issues such as fishing, waste management and access to basic services are better taken into account. 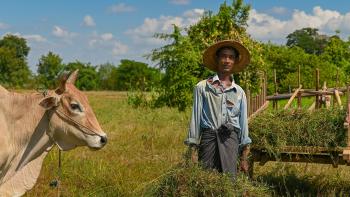